Business confidence is weighted down as the Omicron virus spreads. 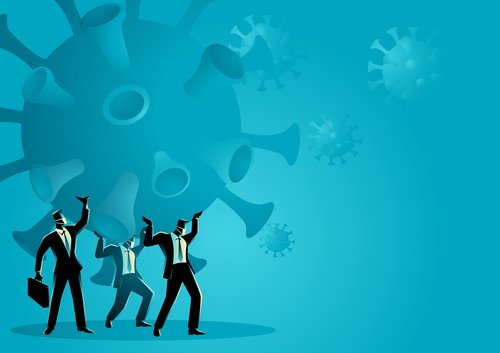 As the number of forces dragging on the economy build up, business confidence has been weighed down. NZIER’s latest quarterly business survey reported a net 33% of firms see worse general conditions ahead. A slight improvement on the December quarters 35%, but still well below the QSBO’s average of 6%. The survey’s measure of domestic trading activity fell in the first quarter, pointing to slower growth. Fortunately, expected activity held its own.

The downbeat mood among businesses was in part due to rapidly rising inflation – a feature of today’s report. Inflation is lifting the cost of doing business, and rising costs are being quickly passed on to consumers. A net 77% of firms intend to raise prices in the coming quarter, a result that rose to a net 99% among retailers. Input costs are rising, labour is harder to source, and there is little spare capacity. CPI inflation is set to come in at around 7%yoy in March quarter. 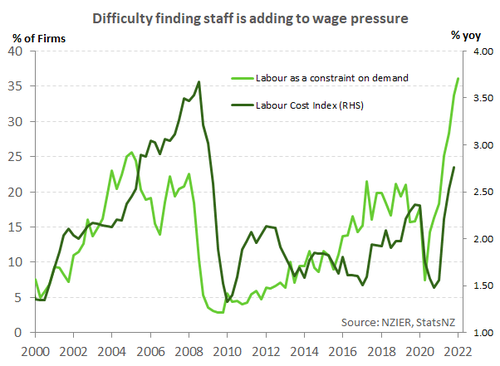 The QSBO clearly showed a big omicron hit to confidence over the first quarter. People stayed home, in part to avoid covid, but mainly to isolate as households came down with the virus. And worker absenteeism added to labour shortages that remain acute. A net 69% of firms noted difficulty in finding unskilled labour. Unskilled jobs, in many cases, can’t be done at home. Home isolation looks to have hit this part of the labour market hard. The labour market is as tight as you can get. Acute difficulty in finding the staff needed and a rapid rise in the cost of living is a recipe for accelerating wage growth ahead.

The retail sector stood out in the March quarter as the most pessimistic industry. Omicron hasn’t been kind. The absence of foot traffic, accelerating costs, and eroded profitability were a familiar theme among all firms. For retailers, a net 30.9% of respondents noted a deterioration in profitability last quarter, and a record 63% see weaker profits ahead. We have seen the impact of omicron on spending in Kiwibank’s own card transactions data. 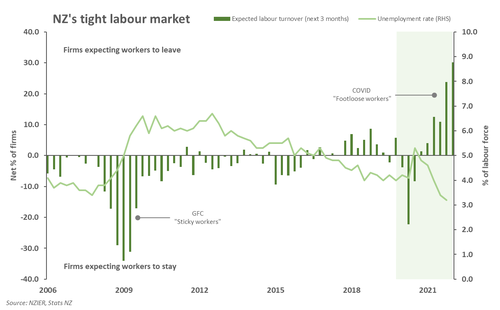 Today’s QSBO from NZIER, supports other surveys and anecdotes that highlight the fragility of the economy at present. Moreover, weak confidence supports our view that the RBNZ should deliver a 25bp hike, rather than a 50bp sledgehammer, at tomorrow’s MPR. There is no question that interest rates need to be progressively raised in order keep inflation anchored to target. But a steady pace of hikes would still ensure inflation is tamed while the economy isn’t slammed in the process. The 75bps of hikes that have been delivered to date are already taking effect. Evident in the cooling housing market.

A lack of spare capacity 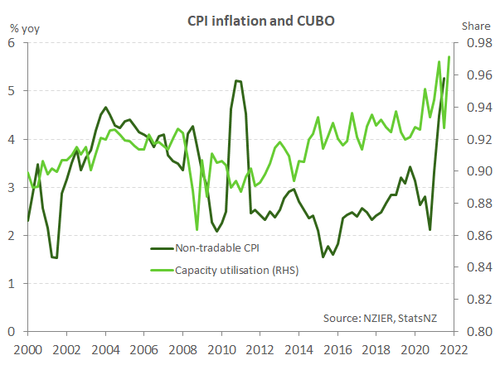 Surprisingly, confidence among builders remains well below average, despite an extensive pipeline of work. A record of nearly 50,000 new dwellings consented in the year to February. But it’s one thing having a massive backlog of work, and another delivering it. It appears that the capacity to deliver is holding back firms. Capacity utilisation rebounded to a new record of 97% among builders and manufacturers – a massive rebound from Q4. Deteriorating confidence is also in part due to tightening credit conditions and the housing market is clearly slowing. More expensive credit and falling house prices are not the environment conducive to rising property investment. Backing up the cooling outlook was the view from architects, that are seeing a slowing of future work.

Now’s not the time

Firms today are operating in an environment of rising borrowing costs, elevated cost pressure, weakening consumption and all-round heighted economic uncertainty. The growing consensus among firms is that the current climate is not ideal for expanding business. Since mid-2021, NZIER’s QSBO reports reveal fewer and fewer firms intending to increase investment. Today’s release showed that a net 6.2% of firms to intend to pare back investment in plant and machinery. The Omicron outbreak may have contributed to the sombre mood in the strategy room. But the March quarter marks the third consecutive reading of declining investment intentions. It’s a worrying trend that points to weaker growth. 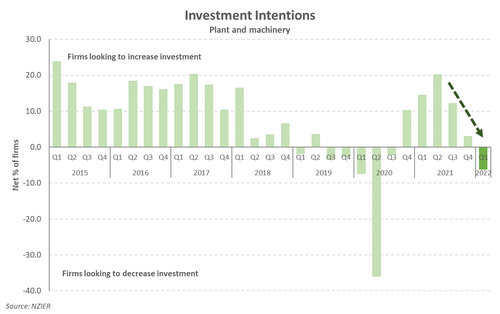 With the closed border, labour shortages have been an issue that’s front and centre for many firms. The pool of available workers has been limited to homegrown talent – and it’s quickly evaporating. A net 70% of firms noted difficulty in finding skilled staff, only a slight improvement from the previous reading (73%). But leading indicators suggest that demand for labour remains robust. Today’s report showed that hiring intentions lifted (net 23% plan to hire more staff, up from net 18%) and expected labour turnover has hit a survey high. Employees are clearly leveraging their newfound bargaining power to switch jobs and secure large wage increases and/or better benefits. The extreme tightness in the Kiwi labour market will lead to further wage increases, which adds to underlying cost pressure. Unfortunately, conditions may get worse before they get better. Given the phased reopening of our border, we see a net 20,00 people emigrating from NZ by the end of the year (see here). With relatively fewer people booking one-way tickets to NZ, the net outflow will only add further stress on the labour market.