The future is brighter for the supply of housing. 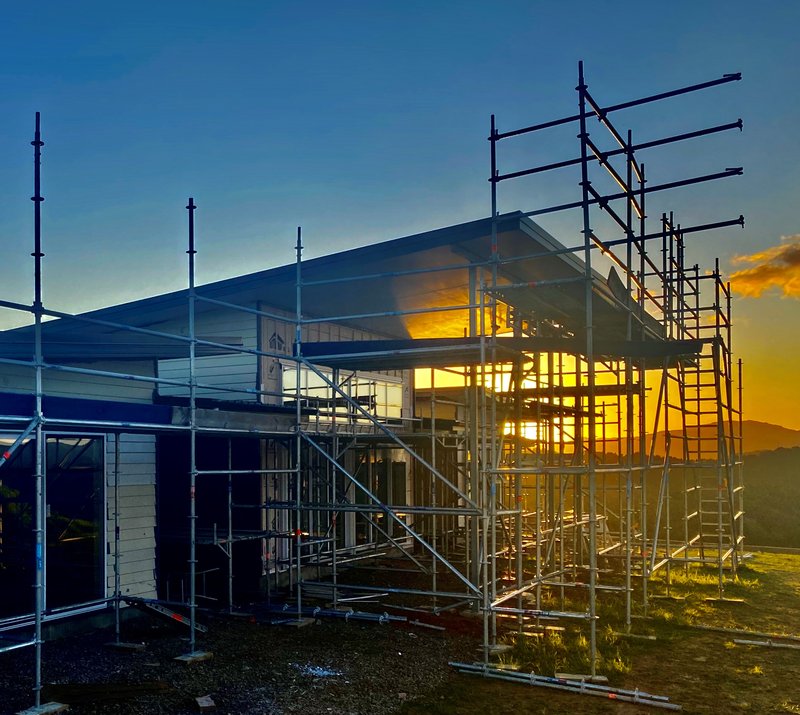 Relaxing the rules to relieve some housing pressure.

In a rare showing of political harmony, both the Labour and National parties last week jointly agreed to dramatically loosen residential planning rules. The significance of a joint agreement underscores the seriousness of the housing crisis that has been decades in the making. An amendment of the Resource Management Act will see new Medium Density Residential Standards (MDRS). The changes will allow denser residential development closer to the centres of our largest cities, where housing is desperately needed. Over time the move should mean housing supply is more responsive to shifts in housing demand. And hopefully reduce the size and length of future episodes of housing shortages.

Landowners will no longer need a resource consent to build three homes of up to three stories on most sites in “Tier 1” councils.  The latest decision is certainly welcome, and fast tracks, plus builds upon, work done around the National Policy statement on Urban Development. If all goes according to plan, from next August the councils of our largest cities will waver the need for a resource consent for medium density housing developments. Some existing exemptions will still apply, such as the development of sites of historical importance and areas with natural hazards.

Housing supply, that is the lack of it, has been one of the key factors behind skyrocketing house prices. We just haven’t built enough homes to keep up with the massive rise in demand. As we published back in April, Aotearoa is still some 67k homes short. Encouragingly, data over the last decade shows (see chart below), that in general the more housing supply a region has built the lower the rates of house price growth experienced. It’s the law of supply and demand after all. 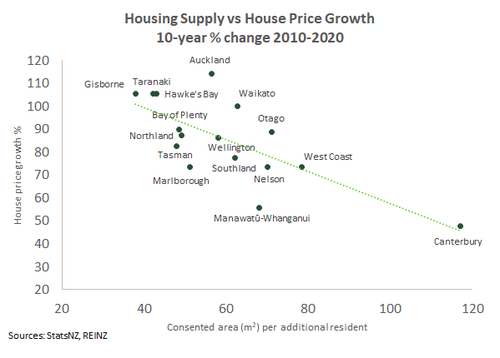 Any decision that aims to boost supply will add to a growing list of factors that are weighing on the outlook for house price growth. We expect house price growth will slow sharply over the coming year, and we can’t rule out the prospect of falling house prices this time next year. Tighter lending restrictions on owner occupiers has come into play, at the same time affordability constraints bite. Significant housing supply is coming online at a time when a closed border has turned off population growth. And mortgage rates are well and truly climbing higher. As noted in our latest weekly report we now see the RBNZ lifting the cash rate to 2% by the end of next year.

But don’t expect a near-term boost in housing supply

Supporting analysis done by PWC and the consultancy Sense Partners estimated new MDRS rules could add around 50-100k dwellings over the next 5-8 years. We think there is unlikely to be many additional homes built in the first year of the rule change.

Firstly, the current pipeline of residential building work is long and beset with bottlenecks. For instance, in the year to August 46½k dwelling consents were issued across Aotearoa. That’s a record number according to StatsNZ. Moreover, complaints from builders regarding acute material and labour shortages have grown louder since coming out of last year’s covid lockdown. The backlog of work is likely to last many months. Also, our largest cities face significant infrastructure deficits regarding three waters and transport. Upgraded infrastructure is needed to accommodate new housing even in well-established suburbs. However, the funding of infrastructure to meet additional housing remains a major uncertainty, particularly given some councils are bumping up against debt limits. Finally, the housing market is likely to look very different in a year’s time. Significantly higher mortgage rates and weaker house price growth may tip the balance away from new residential investment.

Short-tern constraints aside, the major benefit of changing MDRS is over the longer-term. Future housing supply should respond faster to episodes of rapidly rising demand and house price growth. We would expect to see a reduction in the size and length of future episodes of housing shortages. In economics we refer to how responsive supply is to higher prices as the price elasticity of supply. In a perfect market, a higher price for a good or service should incentivise producers to boost the quantity supplied. But how responsive producers are to rising prices varies across markets. It’s far easier, and quicker, for a dairy farmer to increase milk volumes in response to rising dairy prices than it is for property developers to boost housing when the market is hot. Housing faces numerous complexities and restrictions such as zoning rules and building restrictions (for valid reasons) that contribute to lower its supply elasticity. 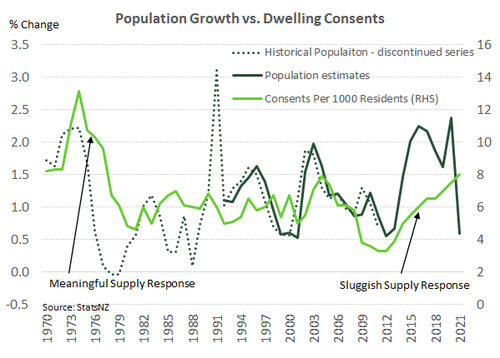 However, building restrictions in NZ look to have become far too onerous, potentially shutting out many from owning their own home. The Director of Economics at the Infrastructure Commission, Peter Nunns, showed in a recent LinkedIn post that tentative estimates of NZ’s housing supply responsiveness has trended lower since the 1960s. Some indirect observations of population growth (a stand in for demand and prices) and building consents (a proxy for supply) supports Nunns assertion. Back in the early-1970s, a past boom in housing construction, population growth hit a high of 2.2% and we were consenting over 13 dwellings per 1000 residents. Fast forward to early 2021 and even following years of population growth exceeding 2% - and house price growth screaming higher - NZ managed to consent only 8 dwellings per 1000 residents. We may eventually build at the rate seen in the 1970s, but it would have taken far longer to achieve. Overtime, additional restrictions on development, such as the RMA, are likely to have played a role in lowering housing supply elasticity. In future we expect supply elasticity of housing to increase following supply side changes such as changes to MDRS.

Allowing for the densification of housing has major benefits. First, allowing more people to live closer to where the most productive and highest paying jobs are (the centres of our largest cities) has a wider benefit for NZ’s overall productivity and wellbeing. That is, not building enough homes doesn’t just shut out people from the housing market, but in some cases the jobs market too.

Finally, huge amounts of paper wealth have been created in the current housing market boom – exacerbating inequalities in society. Tax free capital gains have massively benefited existing homeowners at the expense of potential homeowners. A move to boost future supply that lowers house price growth – or even sees a fall in prices - can help to rebalance this iniquity.