Hitchin’ a ride: interest rates are on the rise as inflation rates redline.

“Troubled times. You know I cannot lie. I'm off the wagon, and I'm hitchin' a ride” Greenday 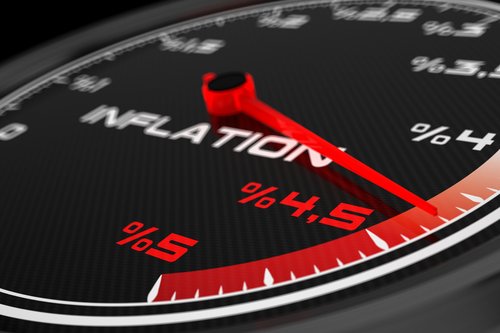 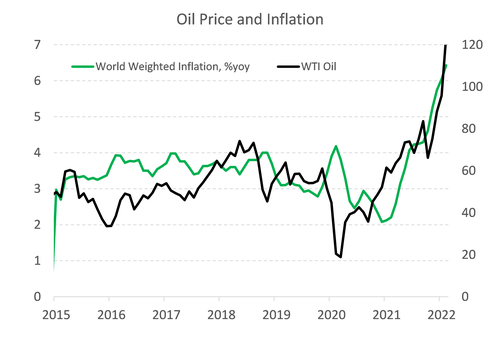 Financial markets have been caught up in the Russian invasion of Ukraine. It is said to be the largest military conflict in Europe since WWII. Equity markets were hit hard, commodity prices soared, and investors fled to save haven assets (namely the USD). Russia’s currency has hit a record low. And traders are bracing for more turmoil. Oil prices rocketed through US$120 for the first time since 2008. Because Russia is a large player in oil and gas, and supply disruptions push prices higher. The imposing of sanctions against Russia risk disrupting supply chains (again) and fuelling already heated inflation pressures. Oil is an important driver of inflation. The first chart highlights the impact of the oil price surge on global inflation.

Further frustrating the inflation outlook is the persistent disruption to global supply chains. The Shanghai shipping index, chart 2, has increased five-fold and shows few signs of declining near term. Inflation expectations are rising as a result, and supply chain disruptions are likely to persist. 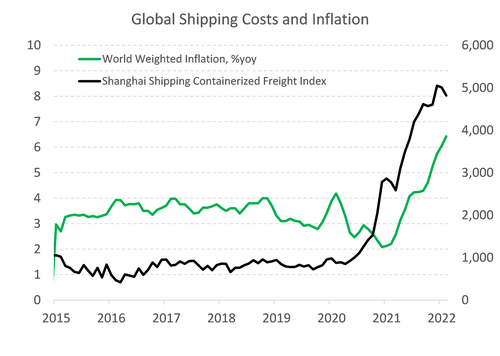 Most central banks have inflation running above target, and most central banks will tighten policy and shed assets. It’s the end of easy money… We have revised our interest rate forecasts higher, with the RBNZ likely to hike the cash rate to 3% next year. The Kiwi dollar should find support.

“Peel me off this Velcro seat and get me moving” Greenday.

Over the last decade inflation has consistently surprised on the low-side. Ageing populations, forever cheaper technology, and ecommerce giants (like Amazon) have put downward pressure on prices. It was only prior to the 2008 GFC where we saw inflation running above central bank mandates. Yeah, that was short lived…

In 2021, inflation exploded. And inflation rates have yet to peak. The Russia-Ukraine conflict has driven commodity prices higher, with global oil prices up over 60% from the beginning of the year. And a weaker Kiwi currency has exacerbated the moves. An inflation rate with a 7-handle looks increasingly likely by the day. 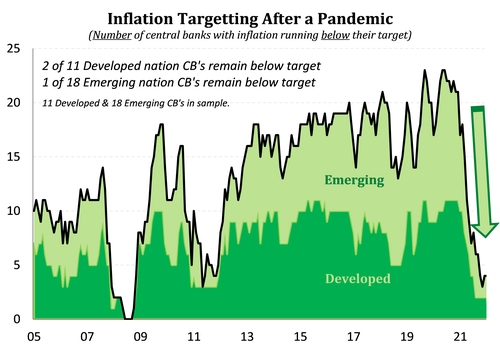 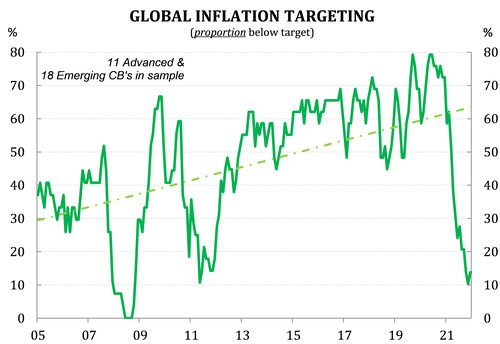 And it is not just a developed world problem. Of the 18 emerging world central banks in our sample, only 1 has inflation running below target – Indonesia.

Most of the global inflation pressure can be put down to strong demand, disrupted supply and high commodity prices. The disrupted supply can still be considered transitory. But the domestically generated inflation is on the rise also – with tight labour markets and rising wages. 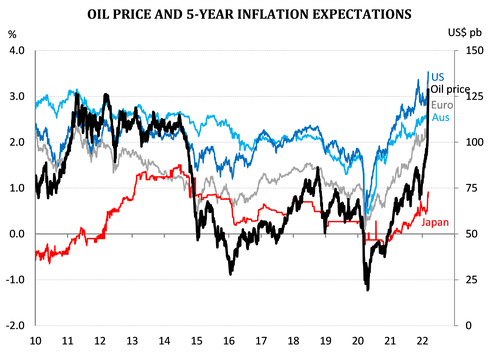 Are we the waiting: the RBNZ is ahead of the pack, but

“Forget me nots and second thoughts. Live in isolation. Heads or tails and fairy tales in my mind” Greenday.

Domestic inflation, the stickier and more persistent kind, is rising in a capacity constrained Kiwi economy. And inflation expectations have responded by following inflation higher. Longer-term expectations (5-10 years ahead) have begun to detach form the RBNZ’s 2% target band midpoint. Moves in longer term inflation expectations are seen as an assault on the RBNZ’s inflation fighting credibility. As a result, the RBNZ has come out swinging. The RBNZ has signalled an aggressive series of rate hikes, that punches well past the neutral rate of 2%. That means monetary policy will stop providing a sugar rush to the economy and put the brakes on firms’ and households’ spending and investment decisions. 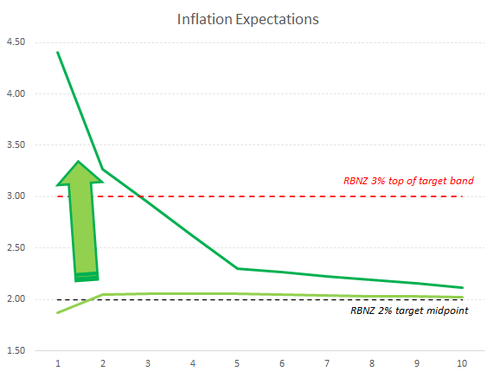 Markets were surprised by the aggressive tone of the RBNZ. And market pricing adjusted upwards as a result, lifting wholesale interest rates. The path for interest rates is clearly higher as the Bank faces into rising inflation. We see the OCR reaching 3% next year. The RBNZ’s resolve to quell inflation expectations points to even higher interest rates for businesses and households ahead. The more aggressive approach is likely to accelerate the decline in house prices as interest rates are ratcheted higher, faster.

The RBNZ displayed their intent by lifting the OCR track (see chart). The OCR track shows the cash rate lifting, swiftly, to 3.35% by the end of 2023. According to the RBNZ, the current cash rate of 1% has at least another 235bps of hikes in the pipeline. Wholesale rates markets have factored in the higher rate path. And the wholesale funding costs for banks have risen sharply. Mortgage rates have risen in response, and we expect to see further hikes from here. 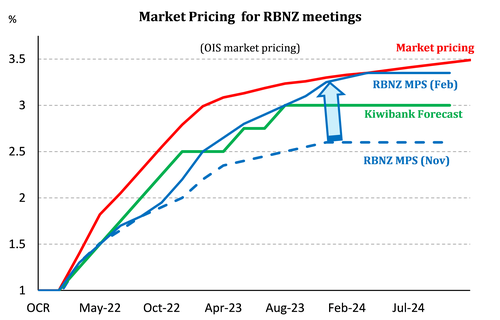 In the background, the RBNZ will also start to run down their asset purchases – quantitative tightening. Having purchased $55bn in Government bonds, the RBNZ will become an active seller. The impact on interest rates will be marginal, but positive, as the RBNZ seeks to be predictably boring in the unwind of its assets. The sale of NZGBs, directly to the NZDMO, will mean the Government will need to issue more bonds in time. More bonds mean higher yields – at the margin – steepening the Kiwi bond curve. The RBNZ will sell their longer dated bonds first, in order to reduce their balance sheet in a rising yield environment.

“My mind is set on overdrive. The clock is laughing in my face. A crooked spine. My senses dulled. Passed the point of delirium.” Greenday. 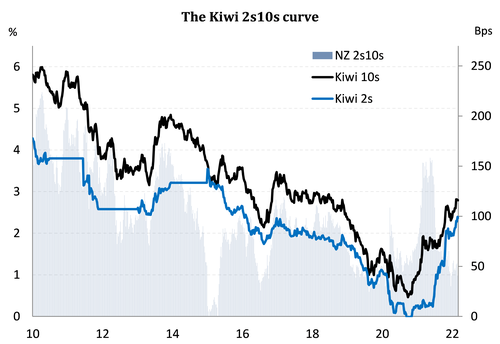 The Kiwi 10-year swap rate has risen from an incredibly low 0.44% in 2020, to an elevated but reasonable 3.05%. The move itself was abrupt, violent, and took a few prisoners. Shorter-dated interest rates, however, have moved much more aggressively, alongside the RBNZ’s commentary. The curve, the difference between 2-year and 10-year swap rates, has flattened (narrowed) to just 15bps, as a result.

The RBNZ, rightly, concerns itself more with movements in the short-end – out to 2-3 years. After all, Kiwi mortgage rates are predominantly priced at short-end wholesale rates. The short-end has pushed higher. It wasn’t long ago we had the RBNZ’s threat of negative rates partially priced. The 2-year swap rate has bounced from an Alice in Wonderland inspired -0.01% in 2020, to +2.90%. Although we’re forecasting an RBNZ rate hike at every meeting and an eventual return to 3%, the market is factoring in more tightening. Traders are pricing in the risk of 50bp moves. 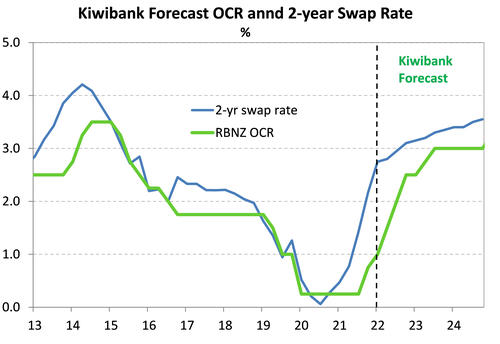 In fact, we deem the Kiwi rates market to be overpriced in the short-end. But in terms of financial market positioning, we see no reason to push against it. Our forecast for the pivotal 2-year swap rate highlights the need for a tortoise, not a hare. 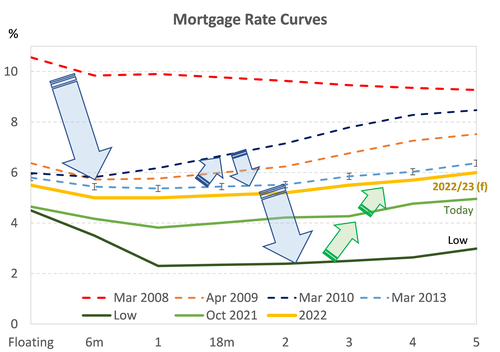 The impact on discretionary spending will need monitoring, with higher debt levels and higher interest rates. Households have taken on more debt and will be more sensitive to rate rises. 70% of outstanding mortgages are due to roll over in the next year. 70% of mortgagees will potentially face higher mortgage rates as their loan rolls over. Rising interest rates and weaker real incomes (with high inflation) will challenge the resilience of household consumption – a key source of economic momentum since the recovery took shape.

When I come around: the Kiwi flyer should return higher.

“So go do what you like. Make sure you do it wise. You may find out that your self-doubt means nothing was ever there. You can't go forcing something if it's just not right” Greenday

The little Kiwi flyer (NZD/USD), AKA the bird, is perched on 68c. The glidepath for the Kiwi has been lower, having breached 72c in November. Heightened geopolitical tensions and broad flight to safety market action has hurt the Kiwi. Plus, other central banks are coming into action, narrowing interest rate differentials. Earlier this year, the Kiwi hit an air pocket and fell towards 65c. Fortunately, the USD has softened, causing the bird to fly back to a high of over 69c. The downdraft comes at a time of incredibly strong export prices and an advantageous terms of trade. Our export prices have held up incredibly well. And despite our imported prices surging. The elevated terms of trade is supportive during our time of need, especially on the export side. The slight fall back in the currency is also providing exporters with a bit more bang for foreign buck. 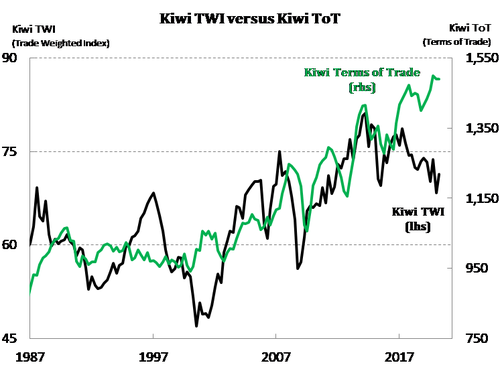 We continue to forecast the Kiwi flyer to end the year higher. Our NZD/USD forecasts have barely changed from last year, but the complexities around the forecasts continue to evolve. The Kiwi should remain relatively well bid in the mid to high 60s over 2022. At 68c today, the risks seem relatively well balanced. There are near-term downside risks due to the Russia-Ukraine conflict, and with other central banks likely to start lifting interest rates as well (narrowing interest rate differentials). We see the Kiwi easing to 65c near term. Our year-end forecast of 71c offers just a little in the way of upside. As the world eventually (hopefully) recovers over 2022, we expect the Kiwi to do a bit more. Risk assets will gather momentum. And with a rise in risk appetite, the Kiwi flyer surges higher. 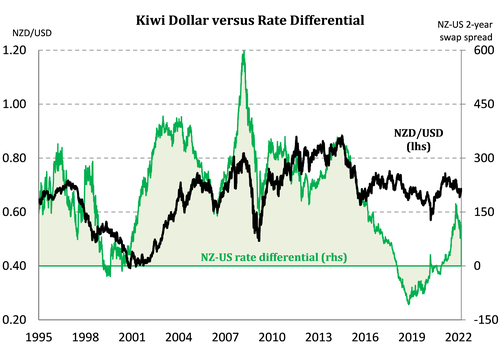 If you’re an exporter, hedging exposures to a rising currency can assist. You will hopefully get your turn to play (again) in the mid 60s. We’re expecting a near term dip back to 65c as the US Fed lifts off and other central banks come into play.

If you’re an importer, 71c is likely, and there may be another push back towards 73c temporarily. Beware of negative press, central bank jawboning and downside scenarios.