Inflation rates have been propelled higher, and the RBNZ is now likely to hike in August. Inflation is rising and so are interest rates. 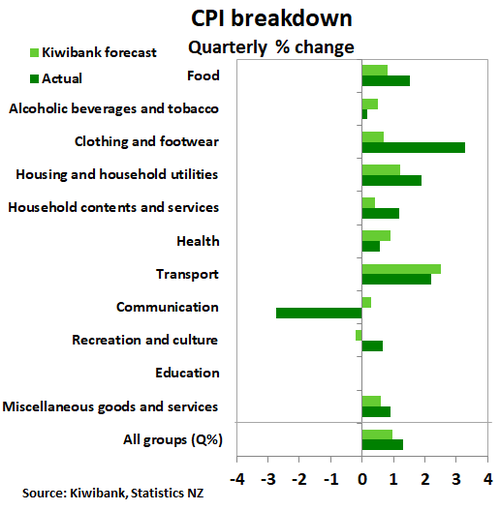 It’s confirmed! Inflation is accelerating and is now through the top of the RBNZ inflation target band. Inflation is set to hold above the top of the target band next quarter. June quarter CPI inflation came in above our expectations at 1.3% in the quarter according to StatsNZ, and annual inflation hit 3.3% - the highest rate in over a decade. But a jump in annual inflation from 1.5% at the start of 2021 was expected. In part because of the base effects from last year’s lockdown induced fall in prices. The last time the annual inflation rate tested such heights was in June 2011, rising to 5.3% due to GST hikes.

What was most interesting was the broad-based nature of inflation pressure evident in today’s report. Demand in the economy has been consistently strong since coming out of last year’s level 4 lockdown. And combined with supply side constraints – such as firms facing challenges in sourcing labour and materials – we have a recipe for price rises. Almost all groups in the CPI basket recorded price rises. Core measures of inflation have also strengthened. Both tradables (imported) and non-tradables (domestic) inflation popped back up in the June quarter.

Some of the key drivers of inflation are expected to be transitory. Global supply-chain disruption should be addressed as the world gets back to a new normal – taking the pressure off shipping costs. Labour shortages will hopefully abate next year as our, by then, vaccinated country starts the process of opening back up to the world. But for the RBNZ, these transitory factors could easily turn into permanent inflation in the current atypical environment. So, something has to give, and the RBNZ is now willing to oblige.

We now expect the RBNZ to lift the cash rate in August, in what will be the first of at least three hikes from here. We’re likely to see two hikes by year end, and a push to 1% by February. Beyond 1% will depend on the interest rate sensitivity of the economy coming off record low rates. We have pencilled in another lift in the cash rate to 1.5%, but likely to be all we see in the near-to-medium term. An earlier lift off from the RBNZ will (hopefully) mean less work will need to be done to restrain the economy in the future.

Inflation pressure is now broad based…

The largest contributors to June quarter inflation were again housing, food and transport prices. But almost all main groups, bar one (education - which was flat), contributed to both the quarterly and annual rise in CPI. The price increases were widespread.

Housing-costs climbed as home construction costs rose 4.6% in the June quarter alone – the biggest jump since 1987! Builders are finding it difficult sourcing materials and labour to build the new houses we need.. Rents too have become increasingly expensive, rising 0.9% in the quarter. With the government’s tweaks to tax policy yet to fully play out, there’s room for rents to push higher. 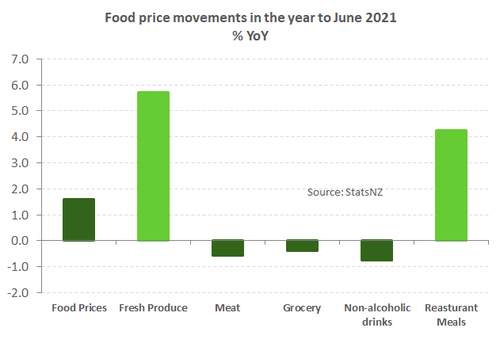 Food prices were another big contributor, thanks to an unusually large winter jump in some fresh produce prices. Prices for fruit and vegetables rose a whopping 7.3% in the quarter alone. But also standing out as a contributor was a massive jump in the price of eating out. Those in the hospitality sector are finding it very difficult to attract staff in the current environment without lifting wages. And rising wages look to be being passed onto dinners. The lift in the minimum wage to $20/hr in April led to the biggest monthly increase in prices for restaurant meals and read-to-eat food since the GST increase in 2010. And in the June quarter overall, these prices rose 2.0%. We await next month’s release of Q2 labour market data to see further proof of accelerating wage inflation.

The rise in transport-related prices was another significant driver. With global demand recovering, commodity prices have powered forth. Global oil prices, especially, have been on the rise, recently hitting a six-year high. And petrol prices have been caught in the uptrend, rising 6.1% in the June quarter. Annually, petrol is 16% more expensive than last June quarter when prices went the other way.

Firms are also finding it costlier to move goods from the ports to the stores. Because global supply chain disruptions have led to rising shipping costs and firms are reporting considerable delays in sourcing materials. But firms have been able to pass on these higher costs to customers. The June quarter saw strong price rises for imported consumer goods in clothing & footwear (3.3%), household contents & services (1.2%), as well as miscellaneous goods and services (0.9%).

Non-tradables inflation, the domestically generated kind, lifted to 3.3%yoy as housing related price rises continue to march higher. Tradables inflation fired back to 3.4% from 0.5% last quarter, as the plunge in transport prices in June last year fell out of the calculation.

…as shown by rising core measures. 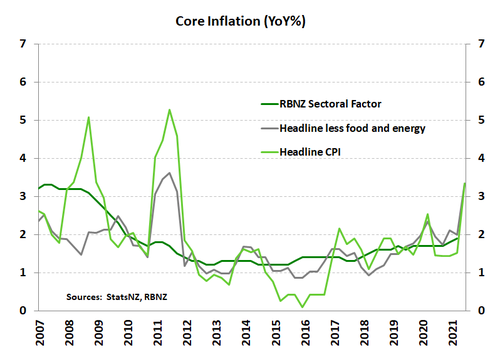 The RBNZ will this afternoon at 3pm release its own core inflation measure, the sectoral factor model. We expect the RBNZ’s own model to show further evidence that inflation in NZ is becoming unhinged.

The annual rise in prices reflect the strong rebound in demand. But the quarterly lift shows that the supply chain issues are starting to bite. The Reserve Bank typically looks straight past cost-push inflation given that it’s usually temporary. Of greater interest is where inflation will land this time next year. And the expectation is for the rate to drop below 2%. However, the current price pressures look likely to be more sustained with supply disruptions ongoing. Because our border is expected to remain shut until next year, at the earliest. There’s uncertainty as to when the issues at the ports will resolve. And the longer these disruptions continue, the longer these so-called “transitory” price pressures will stick around, and long-term inflation expectations will be pushed higher. 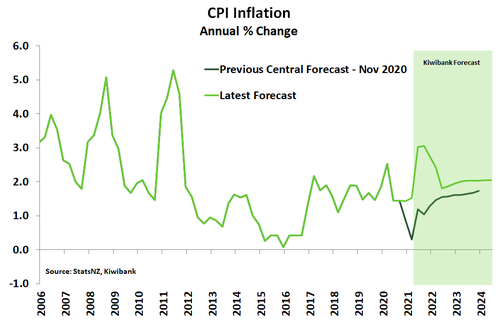 Furthermore, unlike other countries still early in their recovery, we can’t keep pulling the “transitory” card to explain the rise in prices. Prices for used cars and services have been on the up, but so have prices for many other categories. The ability of firms to successfully pass on rising costs boils down to demand that’s running hot. Kiwibank’s own card spend data shows that Kiwi are still on that 2020 post-lockdown spending sugar high. Spend rose 7.2% in the June quarter alone. Improved confidence around job security, a rampant housing market and the inability to travel (freely) overseas continues to support household consumption. Demand has been consistently strong for past year. The economy does in fact appear strong enough to generate a sustained lift in prices.

Factoring in lingering cost pressures and strong demand, the inflation rate may indeed run above the Reserve Bank’s 2% target for much longer than initially thought. Pressure then mounts on the Reserve Bank to act sooner rather than later to keep prices stable. 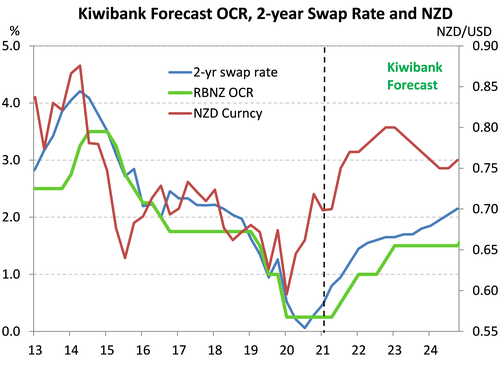 Kiwi swap rates have lifted sharply, with the pull forward of RBNZ rate hikes. The 2-year swap rate hit the springboard today to find itself above 1%, and back above pre-Covid levels. And let’s not forget the 2-year swap rate traded NEGative this time last year as the RBNZ set us up for negative rates. How times have changed. Most of the movement in short-end interest rates is easily explained by the expectation of RBNZ rate hikes. But, we have seen small armies of households rushing to the bank to fix mortgage rates. And these flows can exacerbate the movements in Kiwi swap markets. As we highlighted in May, see “Heed the hawks: rate rises are coming, with mortgage fixing flow to follow.” Mortgage rates across the major banks are rising, as expected, and will continue to lift into next year.