The NZIER survey came in on the weaker side of soft. Interestingly, the crew at NZIER asked a probing question: why?  Well, the two top concerns are Labour policies, and Labour costs.  And then they worry about Labour availability and a Labour induced margin squeeze.  Confidence is still an issue. At face value, the weaker report adds downside risk to growth over the second half of the year. 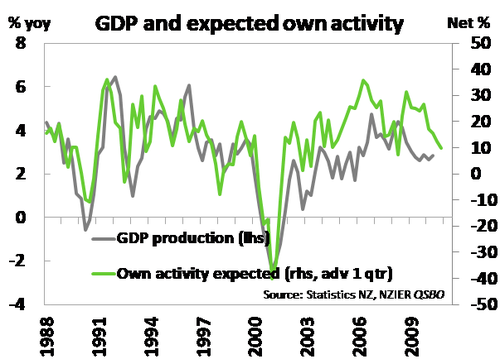 The latest QSBO print showed a continued deterioration in business confidence, and expectations. Falling confidence is not good at this point in the cycle. We desperately need a capital injection into capacity expanding investment. So much needs to be done to sow the seeds for a more productive future. BUT, firm’s thoughts on their own activity fell, and so did their investment intentions. NZIER notes:

“Through the 50-year history of the QSBO, businesses have tended to be more downbeat about general economic conditions than their own domestic trading activity. The difference between headline business confidence and firms’ own trading activity tends to be larger under a Labour-led Government.

This quarter, we added a supplementary question to delve deeper into the key influences on general business confidence.

We found Government policy, labour costs, consumer confidence, availability of labour and operating margins were the key considerations for businesses when it came to an assessment of general economic conditions.

This suggests uncertainty over the effects of new Government policies and higher costs have contributed to the decline in business confidence over the past year.” 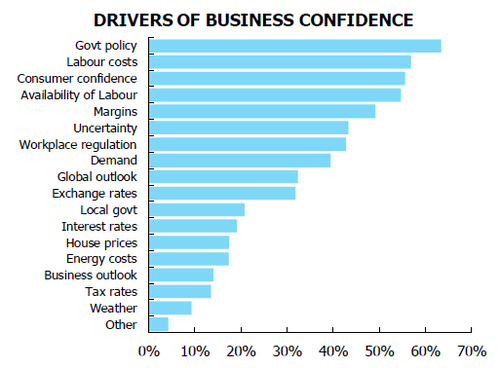 The uncertainty generated out of the Beehive has persisted over the year. Firms’ concerns have yet to translate into materially weaker activity, however.  We believe there may be an element of protest, anti-reform, voting taking place, especially in regard to labour market reform, tenancy reform and taxation reform (capital gains). There’s a lot for businesses and landlords (often one and the same) to get their heads around. It’s uncertainty that kills confidence.  And it’s uncertainty that kills growth. So far we assume a large amount of posturing, and (hopefully) a limited amount of pass-through.  But the risks are clearly down, not up.  Today’s survey is exactly what keeps the RBNZ awake at night, and justifies the central bank’s dovish tilt.

The reaction in financial markets was muted.  We would have expected a bit more, to be fair.  But traders remember the last GDP report (just 2 weeks back), which had a large UPside surprise, and ignored the survey in favour of hard data.  So the little Kiwi flyer hit the slightest of air pockets, and kept on cruising at an altitude of just over 66c (to the Trump-dollar). Kiwi rates are a touch lower. Well, they look lower, maybe not.  It’s hard to see any meaningful change in what looks to be very quiet trading with low liquidity.  Our view remains unchanged on market direction.  Interest rates are going no where in no hurry, and the currency should continue to glide lower. We forecast 2.10% for the 2-year swap rate by year end, compared to 2.04% today (no where). And we forecast 65c for the Kiwi flyer by year end from 66c today – the most gradual descent path.