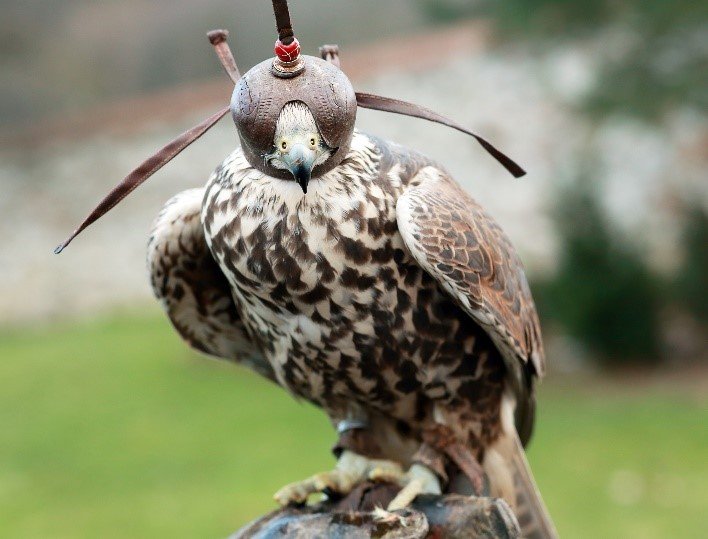 You're squawking like a pink monkey bird. And I'm bustin' up my brains for the words (Bowie)

The next move is almost definitely going to be a hike, unless of course Covid strikes us hard, again. Today’s statement from the RBNZ was hawkish, in the sense that the LSAP (QE) programme is coming to a swift end. The end of the LSAPs was ahead of market expectations, effectively reducing (expected) stimulus in the bond market immediately. At the same time, the RBNZ acknowledged the temporary nature of the current inflation shock – “These reflect factors that are either one-off in nature, such as high oil prices, or expected to be temporary in duration, such as supply shortfalls and higher transport costs…However, the Committee noted that uncertainties remain as to the pace and magnitude of any pass-through of costs onto medium term inflation, especially given reported underutilisation of labour, modest wage growth, and well anchored inflation expectations. The Committee noted that medium-term inflation and employment would likely remain below its Remit objectives in the absence of some ongoing monetary support.”  A dovish tilt on the medium term outlook, giving the policymakers an out.

Today’s message is consistent with a central bank juggling near term inflation pressures and long term deflationary forces. A rate hike in November is a definite maybe. Although November still feels too early to us. Because we are still in the beginnings of our vaccine roll out, and much of the inflation pressure we’re experiencing should be deemed transitory. We need to see a stronger for longer lift in wages growth. From a policy perspective, it’s easy to be too early, and there’s not a great deal of risk to being a little late. And housing affordability must be addressed with supply, not demand measures. Otherwise you’re just seen to do something, rather than actually tackling the problem..

The RBNZ’s mandates are met, at least temporarily.

The Reserve Bank duly noted the recent flow of strong economic data, both globally and locally. The economic climate has unequivocally improved, and the forward-looking indicators are true north. The data continues to surprise to the upside. Notably, the 1.6% lift in economic activity over the March quarter came in well in excess of the RBNZ’s expectation of another quarterly contraction (-0.6%). And the Q1 snapshot of the Kiwi economy makes clear that the recovery is becoming more broad-based. We’ve started 2021 on a much firmer footing. The Reserve Bank’s next set of forecasts will most likely be upgraded, significantly.

The RBNZ’s mandates have arguably been met, much earlier than anyone had anticipated. But it is still too early to claim victory, so early in the vaccination rollout.

The RBNZ’s dual mandates seek maximum employment, and stable inflation. The labour market may be full, of employment. And prices have risen sharply. House price growth is unsustainable also. Anecdotes across our client base, and within the bank, point to severe skilled labour shortages across numerous industries.  Many of our clients are experiencing great difficulty in hiring across many industries. Construction, IT, finance and other professionals are hard to come by. The pool of available talent is evaporating, and to catch the right fish, juicier bait must be used. Wage pressure is building. 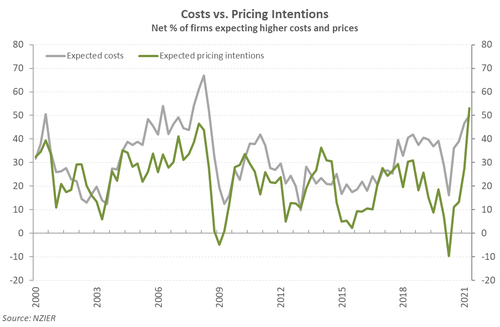 We’re in the middle of an interesting experiment, of sorts. We have relied heavily on migrant labour. Migrant labour has filled many gaps, and put downward pressure on wage growth. Without the inflow of migrant workers, our labour force has tightened, quickly. Anecdotes suggest we are much closer to full employment than previously thought. And the other axis of the beloved Phillips curve is reacting to an array of pressures. Inflation, the original half of the RBNZ’s dual mandate is rising.

Firms are facing a wave of cost increases, on a beach of hot demand. It’s an environment primed for price increases. But the RBNZ typically look straight past cost-push inflation given that it’s usually temporary. Of greater interest is where inflation will land this time next year. And the expectation is for the rate to drop below 2%. However, the current experience looks likely to be more sustained with supply disruptions ongoing. Because our border is expected to remain shut until next year at the earliest. Inflation could run above target for some time, until the issues at the ports are cleared. There’s growing risk that some of the current inflationary pressures turn to stone and long-term expectations are tweaked accordingly. Movement in core inflation measures will be key in determining when the RBNZ will make the first move.

Kiwi wholesale rates markets absorbed today’s statement in a matter of minutes. The ‘reduction in stimulus’, via the LSAP ending, pushed swap rates about 8-10bps higher following the statement. There’s more upside in rates to come. 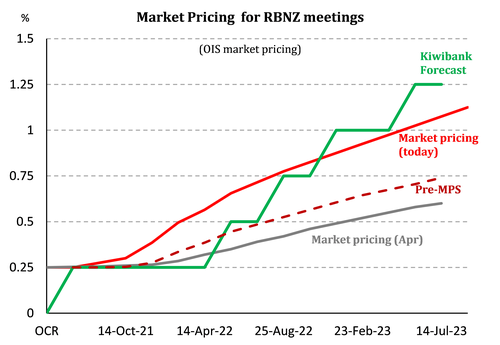 In the lead up to today’s statement, wholesale interest rates markets had been shunted higher and pulled forward. A frenzy of Australian banks pulling forward rate hike calls, forced shorter rates higher. The wholesale (OIS) strip shows a full RBNZ rate hike priced by year-end, at least 6 months ahead of the RBNZ’s OCR track, printed in May. The market is front loaded.

Expectations beyond 2023, however, are on the lighter side. The RBNZ’s OCR shows a full return to neutral (around 2%) by the end of 2024. The market isn’t buying it. And neither are we. Interest rates offshore have flattened significantly in recent weeks – with longer term rates falling (lead by US rates). Market traders, globally, are struggling to price in much in the way of growth and inflation – despite the table banging heard around inflation risks.

And we’ve seen a wave of bank balancesheet – mortgage related fixing – exactly as we expected. We warned of such a move in May (see Heed the hawks: rate rises are coming, with mortgage fixing flow to follow).

The all-too-important 2-year swap rate (the rate banks use to hedge a 2-year fixed mortgage rate, and business lending on a same tenor) has been marked 37bps higher to 0.87% in just a few weeks, and has more than trebled since the start of the year (0.265%). The move in shorter wholesale rates has not (yet) been passed onto shorter mortgage fixed rates. The mortgage curve has steepened from 3-years and beyond. It’s only a matter of time before all rates, esp. the 1-to-2 year rates are re-priced higher, to reflect the move in underlying wholesale rates.

All economically-minded minds are now fixated on the June quarter’s CPI report, out Friday. We are expecting a 1% jump in prices over the quarter, pushing the annual rate to a whopping 3%. Inflation would double from the 1.5% seen in the March quarter. Base effects will be in play as last year’s lockdown depressed demand, leading to a drop in prices. From the Reserve Bank’s latest round of forecasting, they’re picking a 2.6% annual lift in prices- with considerable upward bias. Since May, the wave of cost increases firms are facing has grown significantly. Global supply chain disruptions are leading to higher freight costs, commodity prices are rising, and firms are finding it increasingly challenging to source both materials and staff. But with demand running hot, firms are able to pass on the rising costs. The NZIER’s latest survey of business opinion is evidence that firms are doing just that. A net 39% of the firms surveyed hiked prices in the June quarter, and a net 52% expect to do so in the next quarter.

The Monetary Policy Committee agreed to reduce the current stimulatory level of monetary settings in order to meet its consumer price and employment objectives over the medium-term.

The Reserve Bank will halt additional asset purchases under the Large Scale Asset Purchase (LSAP) programme by 23 July 2021. The Committee will keep the Official Cash Rate (OCR) at 0.25 percent and the Funding for Lending Programme unchanged.

Recent data indicate the New Zealand economy remains robust despite the ongoing impact from international border restrictions. Aggregate economic activity is above its pre-COVID-19 level. Household spending and construction activity are at high levels and continue to grow. Business investment is now responding to capacity pressures and labour shortages, and measures of economic confidence continue to improve.

The Committee reiterated that there will be near-term spikes in headline CPI inflation in the June and September quarters. These reflect factors that are either one-off in nature, such as high oil prices, or expected to be temporary in duration, such as supply shortfalls and higher transport costs.

The Committee agreed that, in the absence of any further significant economic shocks, more persistent consumer price inflation pressure is expected to build over time due to rising domestic capacity pressures and growing labour shortages. However, the Committee noted that uncertainties remain as to the pace and magnitude of any pass-through of costs onto medium term inflation, especially given reported underutilisation of labour, modest wage growth, and well anchored inflation expectations.

The Committee noted that medium-term inflation and employment would likely remain below its Remit objectives in the absence of some ongoing monetary support. However, the Committee agreed that the level of monetary stimulus could now be reduced to minimise the risk of not meeting its mandate.