Our Take: RBNZ August 2017 MPS Review - Nothing to see here

The RBNZ kept the Official Cash Rate (OCR) unchanged at 1.75% at this morning’s August Monetary Policy statement (MPS), but the tone of the accompanying statement and forecasts were a little more upbeat than many in markets had been anticipating. However, the statement was largely in-line with our expectations with the Bank maintaining a balanced tone and leaving its OCR forecasts essentially unchanged compared with the May MPS – implying a gradual rate hike path starting from mid-2019 and forecasting an OCR of 2% by the start of 2020.

The RBNZ has given itself plenty of time to assess how the economy progresses over the coming year and we highly doubt that they will end up leaving rates on hold for as long as they suggest – and in our minds the risk remains skewed toward an earlier hike.  Today’s MPS does little to change our OCR view. We expect that with a growing population and rising capacity pressures, domestic inflation will be strong enough to warrant rate hikes starting from late 2018. However we note that this hiking cycle is likely to be more drawn out and with a lower peak than those seen previously. In part this is due to a lower neutral OCR level (RBNZ estimates neutral is 3.5%), but also due to the elevated levels of debt on households balance sheets that is likely to mean eventual rate hikes will impact spending in the economy relatively quickly. 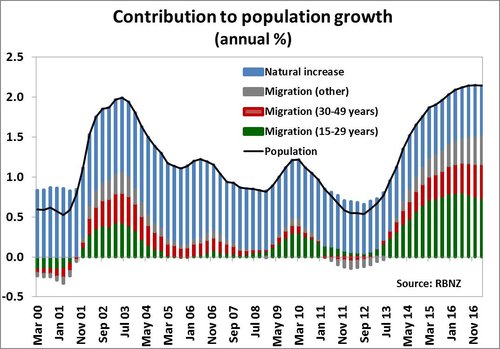 While growth at the start of 2017 was disappointing, and weaker than the RBNZ had projected (2.5% yoy versus 2.9% yoy forecast), the Bank continues to expect that growth will improve over the next couple of years. The RBNZ is forecasting GDP growth to average 3.4% over the next two years and to remain higher in 2020 than forecast in the May MPS. The underlying economic drivers include; stimulatory monetary policy settings, a high terms of trade, rapid population growth and fiscal stimulus. We agree with the Bank’s outlook and also expect growth to rebound over the next couple of years. In our view there is possibly some small upside risk to GDP growth from stronger net migration and higher export commodity prices compared with the Bank’s forecasts.

One of the supporting factors for the NZ economy is strong migration-led population growth. We maintain that there is upside risk to the RBNZ’s migration forecasts and expect net migration to hold up above 70,000 for the next six months (absent a major change in government policy). In addition, there has been a shifting trend toward a slightly older age cohort coming into the country. A concentration of younger (age 15-29) migrants has been one factor attributed to the lower net impact on inflation in the NZ economy compared with previous migration cycles. A shift in composition toward older migrants (who typically spend more) could see a greater inflationary impact on the economy than in recent years. 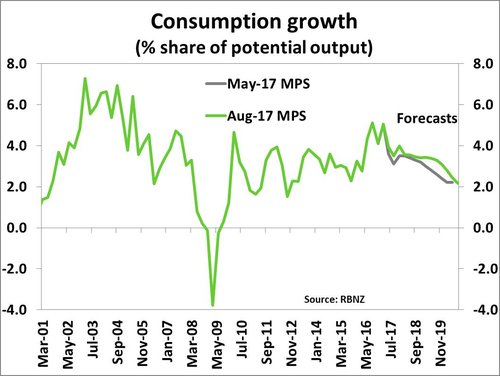 The Bank has slightly lifted its consumption forecasts despite the slow-down that we are currently seeing in the housing market. The recent tax policy changes announced in the May 2017 Budget, combined with a stronger terms of trade, are the driving factors. Furthermore, there is evidence that the ups and downs in the housing market have had less of an impact on household consumption in this cycle. As such, we expect households to keep their wallets open until we start to see material increases in mortgage rates.

While the Bank’s global outlook remains relatively unchanged, there have been positive improvements in the US, Eurozone and China. These positive factors have been largely offset by weaker data in Australia (although this is expected to be temporary), and the risks to the international outlook continue to be skewed toward the downside. A recent softening in international inflation rates has seen the RBNZ revise down the outlook for global inflation in the near-term, but these are still expected to pick-up over the medium term and be accompanied by gradual tightening in monetary policy settings.

At the same time, softer growth in the last couple of quarters and the lower output gap at the start of 2017 mean that domestic inflation pressure will increase more gradually than previously forecast.  The RBNZ now expects to see non-tradable inflation rise steadily from the start of 2018 to reach a peak of 3.6% yoy in mid-2020. This should be sufficient to take headline inflation up to 2% yoy by March 2019. However, with volatile headline inflation, the RBNZ is placing an increased focus on core measures of inflation. As domestic capacity pressures continue to rise, and firms feel more comfortable increasing selling prices, we expect core measures of inflation will increase along with headline CPI inflation. 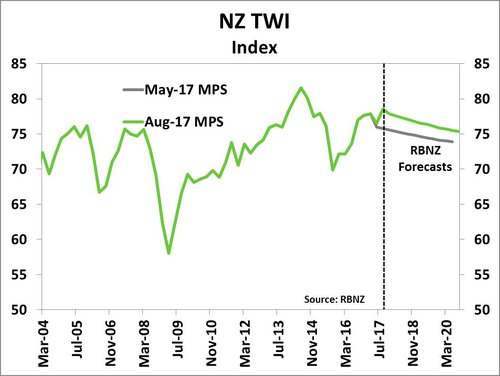 The RBNZ revised down its tradables inflation forecasts in part due to a higher TWI track (see chart), but also weaker anticipated global inflation. In addition, the Bank’s medium-term oil price forecast was lowered to US$55/barrel from $US65/barrel in the May MPS. The RBNZ points out that the current strength of the currency is somewhat justified by an elevated terms-of-trade (a measure of NZ’s purchasing power with the rest of the world), driven by strengthening of prices for NZ main commodity exports and generally lower import prices. This factor is supportive of both domestic demand and inflation pressure. However, of more concern is the recent weakness in the US dollar, as markets have revised down their expectations for the pace of monetary policy tightening in the US. While the Bank is happy to look through the near-term volatility in tradables inflation, it has acknowledged that tradables inflation is expected to remain below average over the forecast period. The weaker tradables inflation forecast emphasises the Bank’s dependency on non-tradable inflation to meet their policy target. However, we don’t expect to see tradables inflation fall quite as low as the RBNZ expects, and hence see some upside to headline inflation in 2018.

The Bank’s house price forecasts were essentially unchanged from the May MPS, and the outlook remains relatively uncertain. There are several forces at work in the housing market that could see prices move in either direction over the year ahead. At present, tighter credit conditions, some pre-election jitters, declining confidence in capital gains in Auckland and tighter LVR restrictions for property investors have taken the heat out of demand – especially in Auckland. However, with elevated population growth and building work still lagging demand the underlying fundamentals remain positive. Both we and the RBNZ expect to see a rebound in housing market activity toward the end of this year. The Bank has incorporated this into its forecasts to some extent, with house price inflation rising back to around 6% yoy in mid-2018 (from around 5% yoy currently) before easing back again. However, the housing market and construction industry could present an upside or downside risk to the economic outlook over the next couple of years.

The main risk to the RBNZ’s current outlook is if non-tradables inflation is weaker than forecast while tradables inflation comes in at (or below) the Bank’s projections. This would see headline inflation fail to reach the mid-point of the Bank’s target range and raise the risk of core inflation and inflation expectations declining. The RBNZ included two scenarios in the August MPS, an upside and downside scenario, which focused on these sides of inflation separately.

The downside scenario honed in on the risk to non-tradables inflation, by examining at the possibility that both consumption and investment become hobbled by ongoing weakness in the housing market and continued credit constraints. The subsequent weaker-than-expected domestic demand would lower non-tradables inflation below the Bank’s central track. The RBNZ showed this scenario would elicit 75bps of cuts by early 2019 to counter weaker domestic inflation. On the upside, the Bank outlined the possibility that global inflation strengthens quicker than anticipated. Higher global inflation is expected to see stronger imported inflation, global monetary policy settings tighten more quickly, and a lower TWI - which combine to drive up tradables inflation. The RBNZ noted that this scenario would lead to 75bps of hikes by late 2019.

Heading into the August MPS there was heightened expectation that the RBNZ was going to deliver a statement that would talk the dollar down from its current pedestal. The one-page summary did include a more direct comment on the currency, noting “A lower New Zealand dollar is needed to increase tradables inflation and help deliver more balanced growth”. However, the comments on the currency and an unchanged OCR track were perhaps not as aggressive as some were expecting. Despite this, the NZD didn’t surge following the statement and in fact is now trading lower following comments from RBNZ Governor Wheeler noting that FX intervention is "always open to us".  The reaction in local swap rates was also subdued, with most tenors trading about 2-3bps higher.