The RBNZ frontloads tightening by pulling out the 50bp sledgehammer. 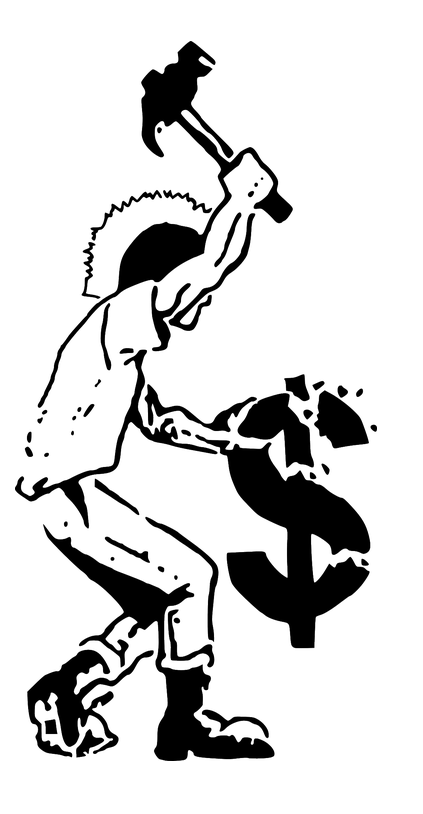 We had expected the RBNZ to deliver a 25bp hike today. We were wrong. The central bank decided to frontload two hikes into one, and has left the door open to further 50bp moves. In its path of least regrets, ramping up rate hikes was seen as the best way to tackle the rampant rise in inflation and expectations.

“The Committee agreed that their policy ‘path of least regret’ is to increase the OCR by more now, rather than later, to head off rising inflation expectations and minimise any unnecessary volatility in output, interest rates, and the exchange rate in the future. The Committee agreed to a 50 basis point rise in the OCR, consistent with this least regrets analysis.” (RBNZ MPR, 13th April)

The cash rate of 1.5% is still deemed ‘stimulatory’, and more hikes are coming. We now expect the RBNZ to deliver another 50bp move in May to a ‘neutral’ setting of 2%. But the RBNZ won’t stop there. We expect the RBNZ to hike to 3% by November 2022 (pulled forward from 2023).

The RBNZ has more work to do to rein in inflation and better balance the economy. The more aggressive approach is likely to accelerate the decline in house prices as interest rates are ratcheted higher, faster.

The RBNZ is tightening policy, by taking interest rates ABOVE normal levels. Wholesale rates markets have factored in the higher rate path. And the wholesale funding costs for banks have risen sharply. Mortgage rates have risen in response, and we expect to see further hikes from here.

Whether the RBNZ should raise the cash rate was never in contention. Rather, the appropriate magnitude of the hike sparked debate leading into today’s policy update. The RBNZ’s decision to pull out the sledgehammer and lift the cash rate by 50bp underscored the real threat that current levels of inflation poses to inflation expectations – and ultimately the RBNZ’s inflation-fighting credibility. Inflation expectations are becoming unanchored. The 5-year ahead measure has already risen to 2.3% and the 10-year ahead broke through the 2% target rate. Running at a 30-year high and inflation is yet to peak. Given the commodity price rally set off by Russia’s invasion of Ukraine, a peak of around 7% looks likely. While the recent surge in inflation has largely been driven by offshore developments, the growing strength in domestically generated inflation is concerning. Because it’s harder to tame. Longer-dated inflation expectations are likely to move further away from target. 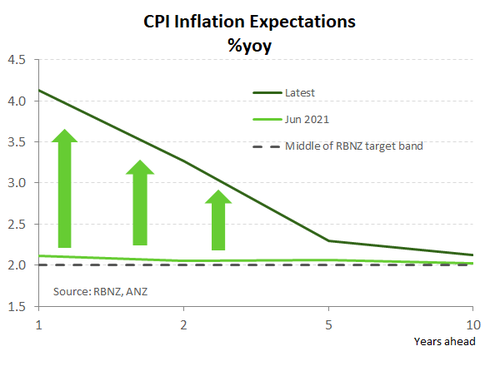 The good news for the RBNZ is that the state of the labour market allows them to focus squarely on bringing inflation back to target. Because an incredibly tight labour market largely protects employment and wages. In fact, conditions are set to tighten further with an expected exodus of around 20,000 people this year, only adding further upside to wages. Well insulated job security provides the RBNZ with confidence that the economy can indeed absorb the rising interest rates needed to temper inflation. Households may be done splurging on big ticket items, but they’ll be able to keep making their mortgage and rent payments.

The reaction in financial markets was surprisingly cool, calm and collected. The decision to hike by 50bps was appropriately priced by interest rate traders. And the wholesale interest rate curve actually fell following the announcement. Receivers re-entered the market as the RBNZ frontloads hikes but does not necessarily lift the terminal rate. The pivotal 2-year swap rate was down 13bps to 3.5%. The 5year rate fell 12bps to 3.63%. And the 10-year fell 10bps to 3.66%.

The reaction in the currency was muted. The Kiwi initially spiked to 69c, from 0.6869, but actually fell back below pre-announcement levels. The Kiwi is currently trading at 0.6862 against the Greenback. We would have expected a stronger push higher in the currency. And we continue to see the Kiwi dollar as undervalued.

The Committee remained comfortable with the outlook for the OCR as outlined in their February Monetary Policy Statement. They agreed that moving the OCR to a more neutral stance sooner will reduce the risks of rising inflation expectations. A larger move now also provides more policy flexibility ahead in light of the highly uncertain global economic environment.

The level of global economic activity continues to generate rising inflation pressures, exacerbated by ongoing supply disruptions in large part driven by COVID-19. The Russian invasion of Ukraine has significantly added to these supply disruptions, causing prices to spike in internationally traded commodities and energy.

However, the pace of global economic activity continues to slow. There is an elevated level of uncertainty created by the persistent impacts of COVID-19, and clear signals that monetary and broader financial conditions will tighten over the course of 2022. Added to this is the high level of geopolitical tension and related economic sanctions on Russia.

In New Zealand, underlying strength remains in the economy, supported by sound balance sheets, continued fiscal support, and strong export earnings. There has been some economic disruption due to the outbreak of Omicron. However, the high vaccination rates across New Zealand are assisting to reduce this disruption.

Heightened global economic uncertainty and inflation are dampening consumer confidence. The rise in mortgage interest rates – amongst other factors – have acted to reduce mortgage demand and house prices. However, economic capacity pressures remain, with a broad range of indicators highlighting domestic capacity constraints and ongoing inflation pressures. Employment is above its maximum sustainable level and labour shortages are impacting many businesses.

The Reserve Bank’s core inflation measures are at or above 3 percent. Inflationary pressure is being further accentuated by current high imported energy and commodity prices, which are lifting headline CPI inflation. The Committee will remain focused on ensuring that current high consumer price inflation does not become embedded into longer-term inflation expectations.