Like a runaway freight train, the New Zealand housing market appears hard to bring under control.

But the market is slowly responding to recent policy changes.

The story in the housing market shown by the latest REINZ data for June is little changed from a month ago. A market with well documented tight supply has continued to deliver headline grabbing house price growth even as sales activity cools. The REINZ house price index (HPI) revealed that national house price growth 29.8%yoy in June, just above the rate recorded in May and a new high for the series (see chart below). Recent policy changes, such as the tightening LVR restrictions and tax changes targeted at investors are applying the brakes to the market. However, the impact to date appears to be much more muted than some had hoped. Monthly house price growth averaged 0.8% in the June quarter, well down on the 2.7% average seen in the previous nine months, but still a reasonable rate. Looking at seasonally adjusted house sales there was a 6.7% gain in June following back-to-back falls. Nevertheless, the 7,700 sales estimated in the month are down from the nearly 10,000 sales recorded at the end of 2020. The median number of days to sell were unchanged at 29 days – 10 whole days below average. 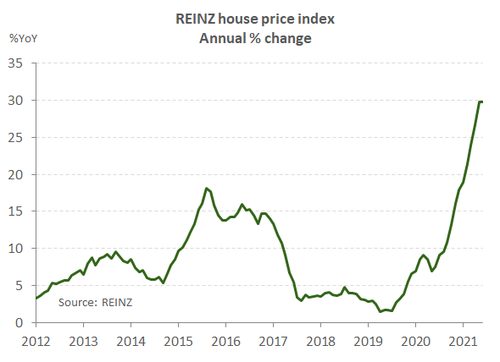 The near 30% annual house price growth now achieved should represent the peak in the current cycle. Recent policy changes should continue to slow down this runaway freight-train of a housing market.  In addition, mortgage rate rises now appear on the cards sooner than had been expected even a month ago. As we saw last week in NZIER’s business confidence survey strong demand is giving firms the confidence to pass on rapidly rising costs to customers. The case is now building for the RBNZ to start lifting the cash rate this year rather than next. In fact, the much more resilient housing market seen since the RBNZ’s May policy statement also adds to the case for rate hikes. Also weighing on house price growth is the significant new housing supply coming on stream. However, new supply is now at risk from major supply issues faced by builders. Supply chains issues are making it harder for builders to source materials and labour shortages in the building industry are more acute than most. The challenge to address Aotearoa’s housing shortage just got tougher.

Looking at the regions, house price growth remains grotesquely high across all regions. The Manawatū/Whanganui region takes the biscuit for the highest rate of house price appreciation at 48%yoy, but down from an upwardly revised 52% in May! Just down the road the Wellington region hit a 43%yoy, by far the highest on record. The rest of the North Island is recording around the 30% mark. In the south, both Canterbury and Otago regions are also fast approaching 30% house price growth. In most regions, sales activity partly reversed falls experienced in May. A key exception was the east coast of the North Island with both the Hawke’s Bay and Gisborne experiencing a decline in seasonally adjusted sales.