Consumer spend was weak over the March quarter for a variety of reasons: seasonal weakness, payback from the Delta lockdown rebound, and the Omicron outbreak. Although the blow to spending caused by the latter was not as severe as seen during previous outbreaks. Because while the move into Red light came with fresh restrictions, they allowed for a greater range of activity in aggregate. Beyond the March quarter, household consumption faces several headwinds as budgets are stretched thin by rising inflation, rising mortgage rates, falling house prices and recent revisions to regulation.

The Omicron outbreak which has dominated the first three months of 2022 also stands guilty for weak spend levels. Although the blow to spending was not as severe as seen during previous outbreaks. The 9.1% drop in spend is just 2%pts deeper than drop over the March 2021 quarter. The move to Red light came with fresh restrictions akin to Alert Level 2 which allowed for a greater range of activity, in aggregate. Despite Omicron being the largest outbreak, spending held up relatively well.

However, that’s the big picture. And the return to Red has had a disproportionate impact. As google mobility data suggests, retail foot traffic has once more waived and spending has followed suit. The deepest decline in spending was seen in high-contact services including retail, hospitality and entertainment.

One bright spot is the gradual pull back in gambling spend from the spike seen during the March 2020 lockdown. While still sitting slightly above pre-pandemic levels, spend is down 30% from the March 2021 quarter. At the same time, spend on alternative forms of entertainment have picked up as the economy reopened.

Overall spend may also have fared relatively better than expected over the Omicron-riddled quarter due to inflation boosting the value of transactions. 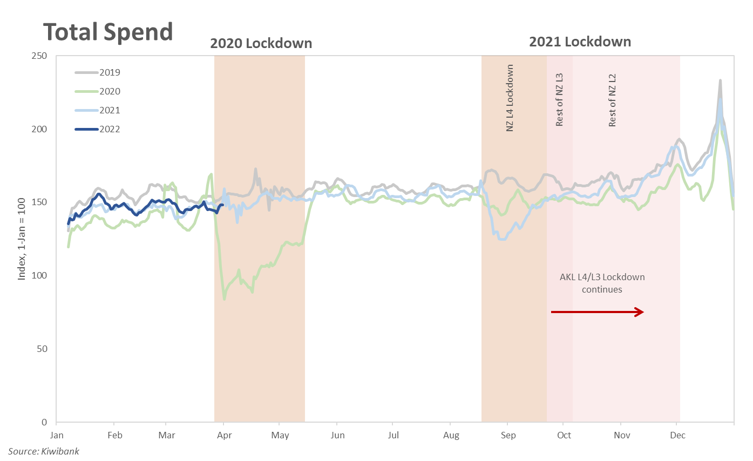 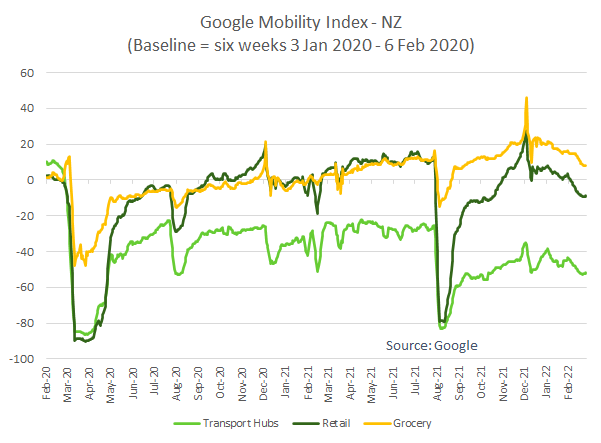 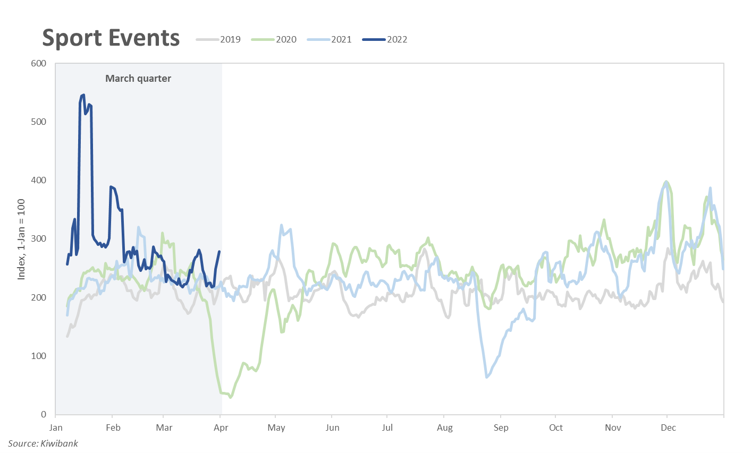 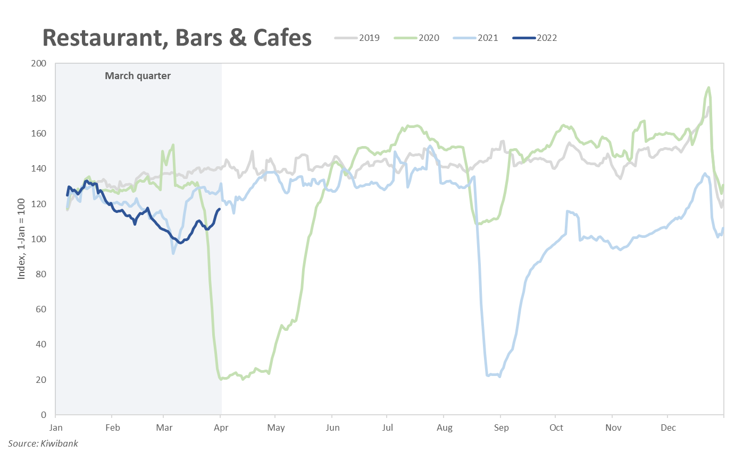 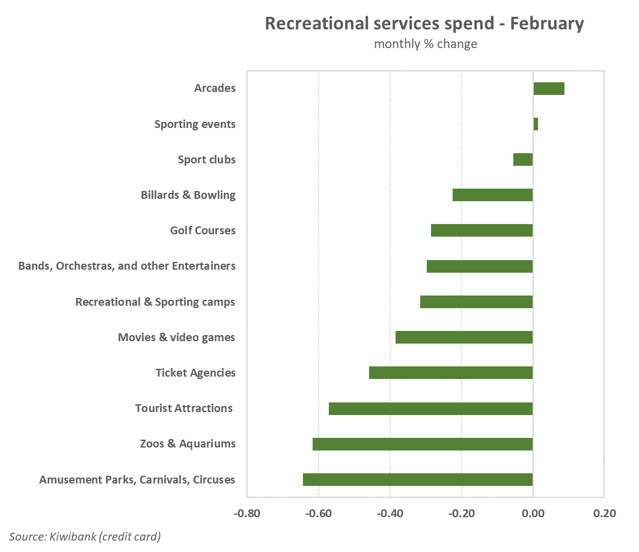 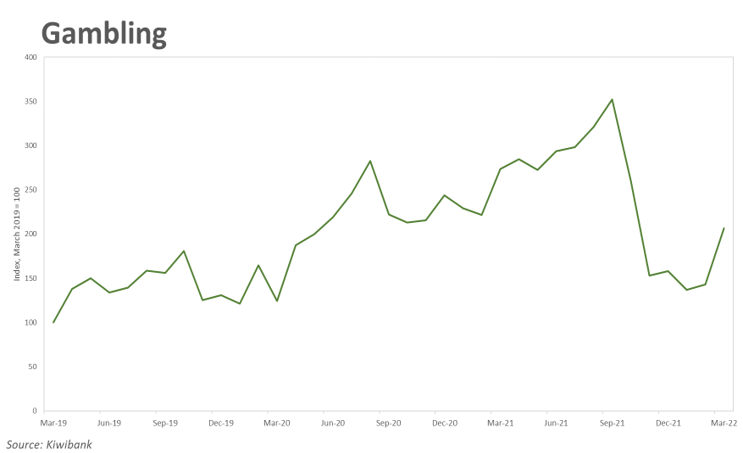 Russia’s invasion of Ukraine has disrupted supplies of oil, gas, and several other key commodities. Commodity prices spiralled higher. In early March, global oil prices breached US$120/barrel – the highest in almost a decade and a 60% jump from the beginning of the year.  Local petrol prices were caught in the uptrend. With prices pushing past $3/litre, the value of petrol spend in March rose 8.4% compared to the month prior, and up 12.1% compared to a year ago.

In response to the energy price shock, the Government has reduced the fuel excise tax until mid-June and incentivised the use of public transport by halving fees and fares. However, as the conflict continues in Europe, petrol prices have climbed back toward and through $3/litre in some parts of the country.

Also adding upward pressure to oil prices is the recent lockdown of key industrial areas in China, as the country faces its largest outbreak in two years. Locking down the world’s factory will also exacerbate current supply chain disruptions and shipping costs, which had previously been showing tentative signs of recovery.

There’s demand for goods, but supply is harder to source in today’s climate. And our island nation is especially vulnerable being located at the bottom of the world. Spend on retail goods, including apparel, home contents & furnishing & hardware, are holding up so far. But we could see the value of spend rise as a consequence of elevated cost pressures. 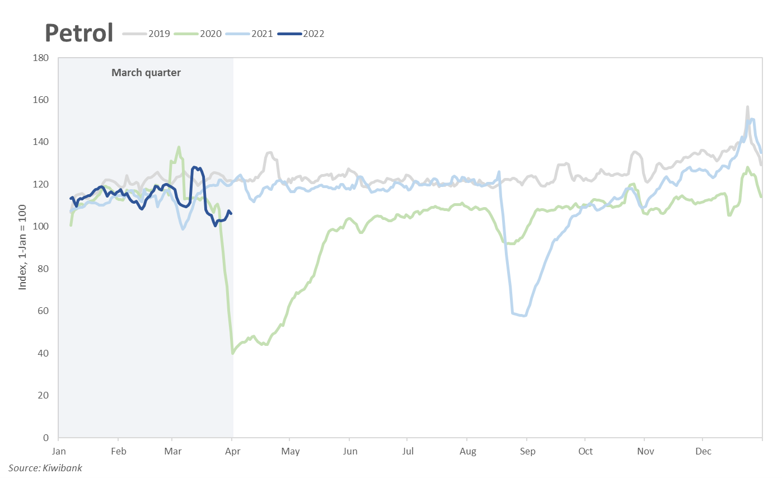 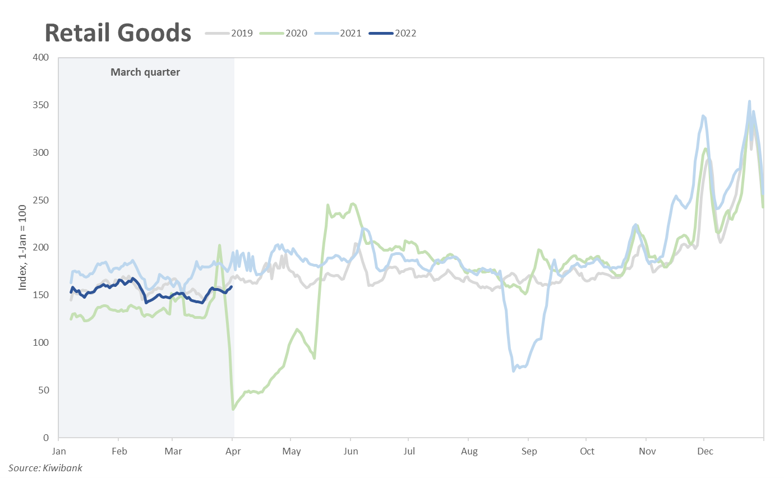 With Omicron spreading like wildfire across the country,  you’d think there would be little appetite for people to jump on a plane (aka a flying petri dish). However, the opposite has transpired. Flight bookings climbed a massive 80% over the quarter. The removal of MIQ for vaccinated Kiwi upon return is likely to explain the sudden surge in bookings. Two years of a closed border has kept families apart, cancelled many overseas holidays, stalled plans of an OE, and hit pause on overseas careers. There’s a lot of pent up demand to venture beyond our four walls. But now, the decision to leave has been made easier knowing that they can return without the need to enter managed isolation. As explained in our note (“A grand reopening of Aotearoa is likely to add to labour shortages this year”), we expect annual net migration outflows could reach 20,000 by the end of the year.

Webinar fatigue and feeling all ‘Zoomed out’ may also explain the jump in flight bookings. People may be choosing to attend conferences and network in person than opt for the digital alternative. With covid going from pandemic to endemic, people are learning to live with the virus which means leaving the hermit’s cave.

Perhaps more reflective of the current domestic tourism scene is the relatively weak spend at hotels and accommodation. Growth in this category appears to be slowing. Kiwi have explored their backyards to their hearts content for the past two years. But now, there’s a longing to check out sights abroad. With more people expected to leave than arrive this year, it’s hard to see domestic tourism spend experience another 2020 spend up. Overseas tourists are desperately needed to revive the sector. Hopefully we see our Aussie mates hit the slopes in the upcoming winter ski season. 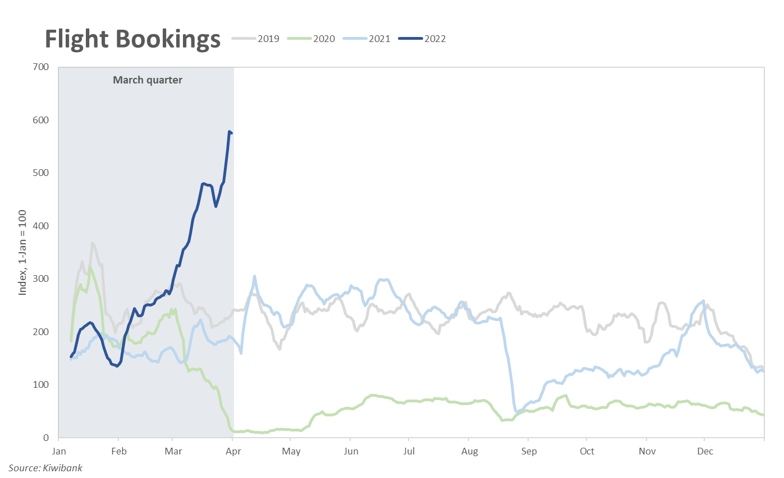 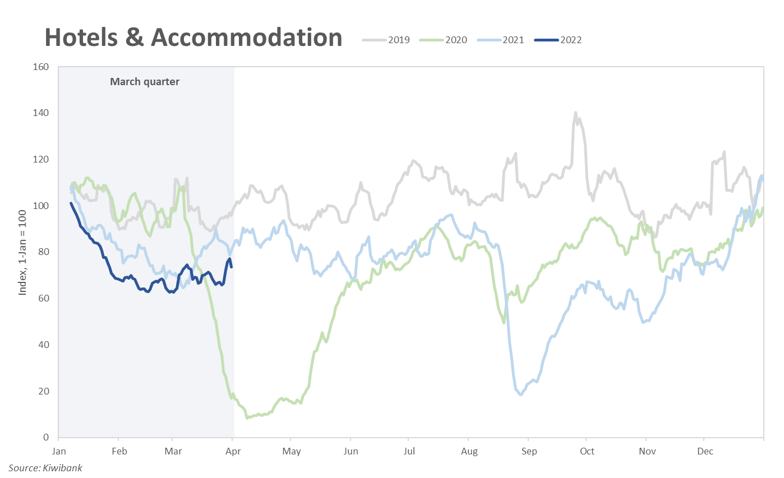 A rampant housing market has underpinned much of the strength in housing-related spending. However the market is cooling, and spend dropped 22% over the March quarter. Seasonality may explain the pullback. However several surveys over the March quarter revealed weakening consumer confidence as households face the Omicron outbreak, rising mortgage rates and rising inflation. Today’s climate is not ideal for splurging on big ticket items.

Another culprit for weak spend may be the stricter consumer credit legislation (CCCFA) that’s binding new bank lending. For households in pursuit of a mortgage (or wishing to top up), changes to the CCCFA ultimately mean cutting back on spending. No more new pools, new furniture, or new pets.

The new responsible lending rules have been hard to swallow. Given the backlash, the Govt has tweaked the rules so that going through past expenses with a fine tooth comb is no longer necessary. These changes are expected to come into effect by the second half of the year, at the earliest. We are unlikely to see a meaningful change in spend behaviour until then. 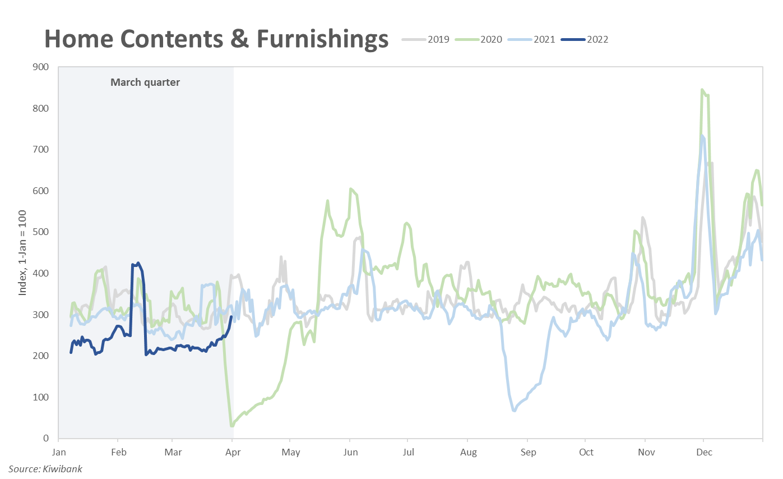 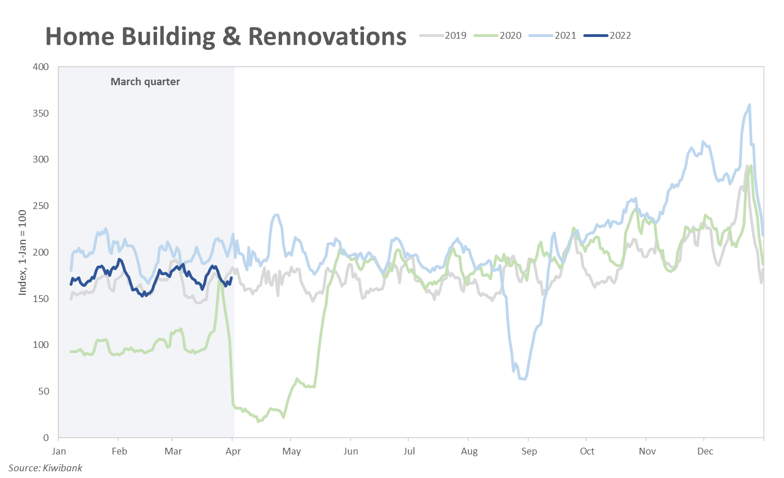 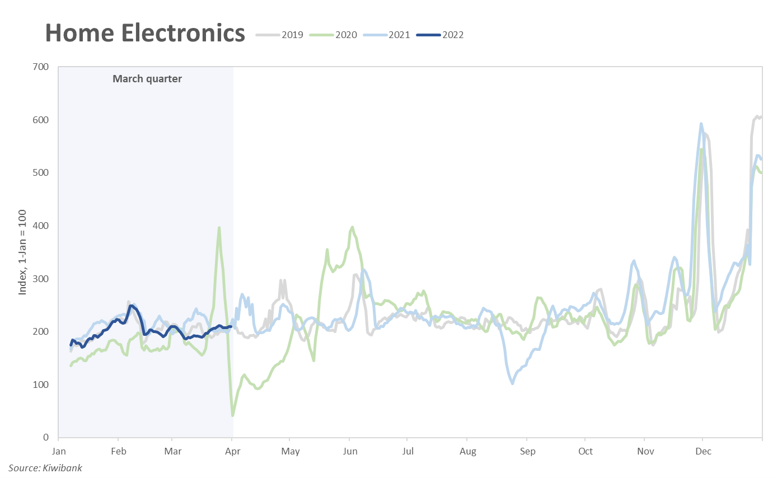 Household consumption has been a key source of economic momentum since the recovery took shape. But rising prices, rising interest rates and a housing market in retreat eat into households’ discretionary spending. And weaker consumption points to weaker economic growth.