Super-charged growth into lockdown should see the economy spring into summer. 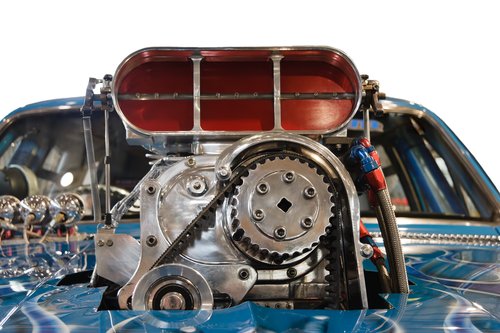 The Kiwi economy had built up a decent head of steam over the first half of 2021. The June quarter GDP report printed a supercharged 2.8% jump in activity, following the 1.4% in the first quarter of 2021. Base effects from last year’s lockdown meant that annual growth was propelled to 17.4%. The jump in production GDP was driven by services once again. But to be fair, primary and goods-producing industries both made decent contributions too. Fewer covid restrictions and the trans-Tasman travel bubble opening provided a boost to transport and retail activity. Economic activity continued largely uninterrupted in Q2. On the expenditure side, the economy expanded 2.6%qoq. Export of services were up a massive 63% in Q2 thanks to the travel bubble. But the level of export service was still 43% below pre-covid levels and indicates the hurt that has been felt by tourism and education from covid. 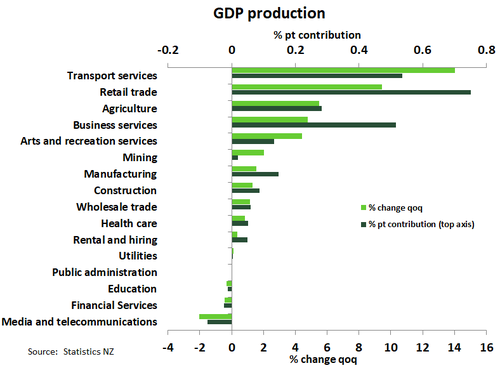 As we have already mentioned, the remarkable rate of growth seen in the June quarter is old news. Delta has disrupted the recovery and is now dominating. We are expecting a 7% fall in Q3 as a result of lockdown. less than the upwardly revised 10% fall experienced last lockdown. But the current disruption is expected to be fleeting and followed by speedy rebound in the December quarter.

There was nothing in today’s report that would derail the RBNZ’s desire to continue unwinding emergency policy settings from next month. We are expecting a 25bps hike in the cash rate in October, followed by a series of hikes.

No such thing as a free lunch!

The economy performed remarkably well coming out of last year’s lockdown, and we expect the same this time around. However, despite the economy quickly making up for lost ground, the impact has left economic scarring. A closed border has done damage to industries such as tourism and education. In addition, the disruption has forced some firms to rethink their business models. Projecting the pre-covid trend in growth suggests the economy would have been over 0.8% larger in the June quarter. 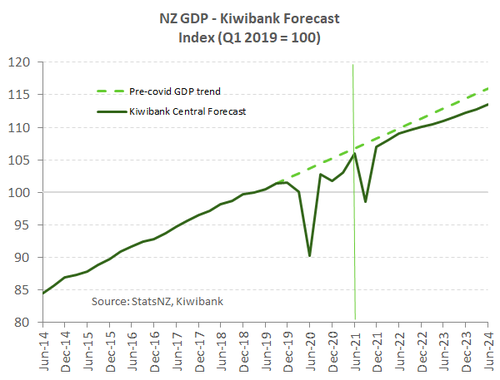 Any scarring from the latest lockdown though will likely be much smaller. To start with, the Level 4 for regions outside Auckland was shorter than last year and most activity is allowed to resume. Furthermore, businesses in general were ready and adapted to life in lockdown. And the Government was able to roll out policy that had been proven to work in previous lockdowns.

The lockdown will still see a sharp drop in the September quarter GDP. Looking beyond Q3, recent data releases are showing early signs of an economy holding up well to delta disruption. Our own electronic cards data confirmed a decent rebound in spending outside of Auckland (see below). And ANZ’s preliminary business confidence survey for September showed remarkable steadiness in forward indicators of activity. For instance, a net 18% of firms expect increased activity ahead, only 1%pt down on August. And to put that into perspective - in the dark days of lockdown last year a net 55% of firms were picking a fall in activity – a survey low.

We now all hope the long tail of the current delta outbreak in Auckland is quickly docked. We are forecasting a rebound in the order of 8½% for the December quarter. 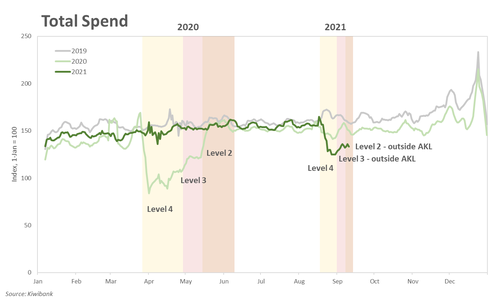 As expected, card spending plunged once the nationwide lockdown kicked in. And the fall in spend across categories was broadly similar to that seen in Lockdown 2020. However, overall spend is proving more resilient, helped by the shift to online. Last year’s lockdown prompted many business to establish an online presence. The ability to shop online supported spending during the lockdown period. Many of us were still clicking, just not yet collecting. Because online retail held up far better than Lockdown 2020, the drop in overall spend was only half the drop seen last year. We learned and we adapted. 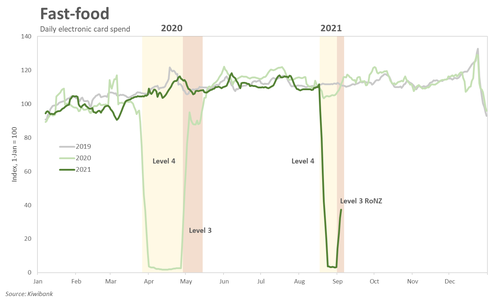 Not only was the drop in spend much shallower, but also shorter-lived than last year. Because the restrictions outside of Auckland were scaled back much sooner. The move to Level 3 allowed more business to open, albeit with contactless service. Spend on fast-food and cafes immediately rebounded for the rest of NZ, excluding Auckland.  Furthermore, the time spent at Level 3 was shorter compared to last year (Level 3 consisted of 17 days in 2020 and 8 days in 2021). Level 2 allows a return to the office - compliant with social distancing, of course - and more people are allowed to congregate. Spend on travel and retail services rose, accordingly.

Total spend has been rising since the lockdown was lifted outside of Auckland. But it’s a slow ascent. Because NZ’s largest city is still “locked down”. The current rebound is capped to some extent. Unsurprisingly, Auckland’s share of total volume of spend fell to 32.4% (from 37.2%) as the rest of NZ moved into Level 3. The imminent move to Level 3 in Auckland however should give total spend another leg-up, both in terms of value and volume.

The stars align for rate hikes

A red-hot economy, tight labour market, rising consumer prices, and eye-popping house price growth. When the stars align like this, a rate hike is imminent. There’s little need for monetary policy settings to remain so stimulatory. We’re no longer in a recession. The RBNZ has already called time on its bond-buying programme (LSAP). The next move should have been a rate hike in August. But cue the Delta outbreak. However, a softer blow and rapid rebound from the Delta Lockdown is expected. The RBNZ is unlikely to be blown off course. We expect the RBNZ to follow-through in October, with three hikes to 1% by February 2022. Further rate hikes will be dependent on how the economy responds to rising mortgage rates. But we expect the cash rate to move to 1.5% by this time next year. All lending rates, and savings rates, will push higher into next year. 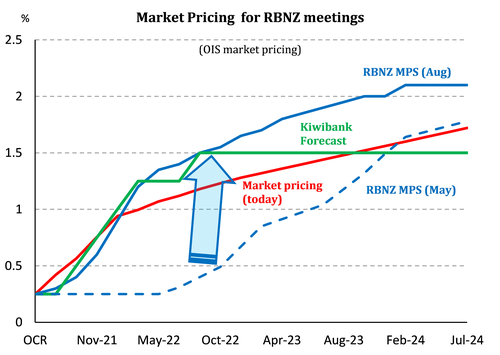