Whooshkaa! Our growth is better than you think. And Goldilocks is comfortable.

It’s not all economic doom and confidence gloom. Weak confidence has not (yet) translated into weakness. 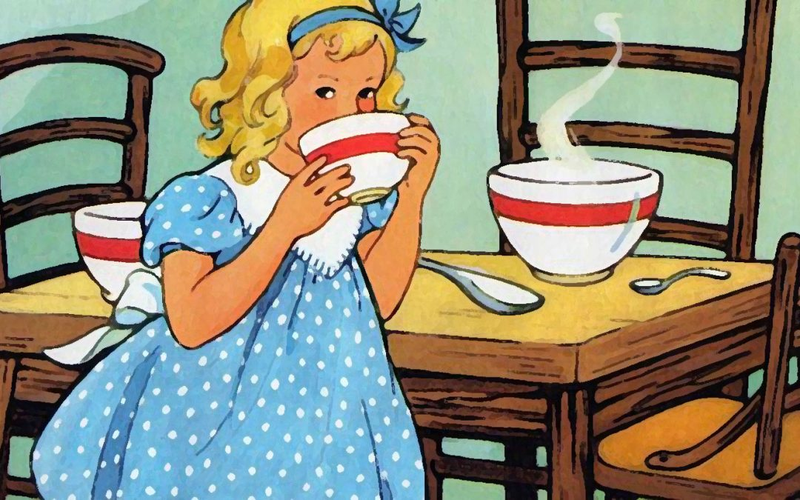 It’s nice to have a good economic news story - hopefully it lifts a few heads. Growth over the second quarter was very good. The economy expanded 1.0%, well above forecasts, and lifted annual growth to 2.8%yoy. The consensus of market economists was 0.8%qoq (2.5%yoy). Trend growth is around 2.75%, so we’re running at the “Goldilocks” growth rate. The Kiwi economy is running “just right”, not too hot, and far from cold. We do have some fiscal stimulus in the pipeline, that will microwave our run rate to 3.4% this time next year. So in the years’ time we expect to be running a “little hot”, but not “too hot”. We need the heat to generate inflation.

Business confidence has continued to deteriorate over Q3, and present downside risks, however. In return, our central bank Governor has expressed a desire to do whatever it takes (sorry Mario Draghi, it’s just such a great line), and push financial markets in a dovish direction to assist with our growth and inflation needs.

From a fiscal perspective, the size of our economy is larger than economists expected for the quarter, and now much larger than economist expectations one year ago. The Government’s budget emphasised the importance of the larger economy. As it showed an extra $3.4bn in projected revenue growth thanks to that larger base, or starting point. And we may well get another larger base (in upward revisions) to work off next budget. Our forecasts see a meaningful uplift in nominal growth over years to come. With the expected upshift in real growth, we expect a meaningful uplift in (wage) inflation.

Despite GDP growth coming in well above the RBNZ’s most recent forecast, the RBNZ is unlikely to materially alter their dovish stance for next week’s OCR announcement. The Bank is unlikely, in our opinion, to take any chances on inflation at the minute. Inflation has been too low for too long. Persistently weak business confidence is casting a shadow on future growth, and monetary policy is forward looking in nature. We expect the Bank will sit on its hands for some time to come. At next week’s OCR review the RBNZ will almost certainly keep the OCR unchanged at 1.75%. And we expect Governor Orr to maintain a similarly cautious tone that was presented at the August Monetary Policy Statement (MPS).

There was broad-based growth in the quarter, which is good.

Economic growth was widespread across sectors in Q2, 15 of the 16 industry categories recorded expanding activity. The broad-based nature of Q2 growth was surprising and adds to the overall glow of June quarter figures. Services once again made a significant contribution to growth, with all service sectors expanding. Services related to household spending were a key feature of services activity. Retail trade, wholesale trade and transport services were among the largest contributors to services. The momentum seen in services activity is a function of the demand generated by past rapid population growth. Population growth remains strong, but is waning as net migration glides lower.

A real surprise of June quarter GDP was the 4.1%qoq jump in primary production. Well above the 1.2%qoq we had expected. Dairy was a key driver here, and favourable production conditions since late summer has supported milk production. Sheep and beef farming also made a strong contribution. Meat prices, particularly lamb, have been sitting pretty, and have likely supported production. But culling of cattle in response to the M.bovis outbreak, is likely to have also played a part in higher meat production in the period. Electricity generation rebounded from the March quarter, on stronger household demand.

Mining was the only sector to have experienced a fall in activity in the quarter, and it was a spectacular one at that – down 20% qoq see chart. This fall however, was related to one off factors such as a precautionary shutdown of the Pohokura gas field due to gas leaks. This closure did flow through to the Methanex facility in Taranaki putting a temporary stopping production. But this disruption is only temporary, so says nothing about the future growth outlook. 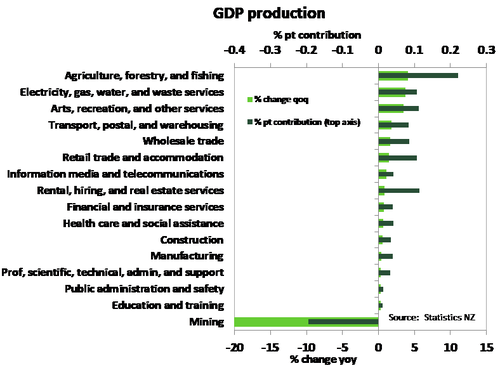 Expenditure GDP also posted a decent rate of 1.2%qoq, that was twice the rate we had expected. That follows a 0.4%qoq increase in the March quarter and took annual expenditure growth to 3.0%yoy. StatsNZ did publish historical revisions to GDP data, which were minor in the scheme of things and mainly impacted expenditure GDP.

The standouts in the second quarter was a solid 2.2%qoq lift in government expenditure, both central and local government made decent contributions. The surprise jump in primary production feed through to exports in the quarter, which were much stronger than anticipated. The weakness in the figures was a 0.1%qoq decline in investment expenditure. This looks to have centred on a contraction in plant, machinery and equipment investment. But this should be put in context. Investment expenditure was still up 4.5%yoy in the June quarter. What would be more concerning would be a continued contraction in business investment in the coming quarters. That would add meaningful evidence that the downbeat mood expressed by business.

Today’s GDP release remains somewhat overshadowed by evidence of downside risks to future growth. The RBNZ has made clear that it won’t hesitate to cut the OCR if growth falls below trend. Indicators so far released for the September quarter, mainly business and consumer sentiment survey’s, do indicate softer activity. However, this data is largely expectation and perception driven rather than being hard data. And there may be some “protest voting” against the Government in the numbers. 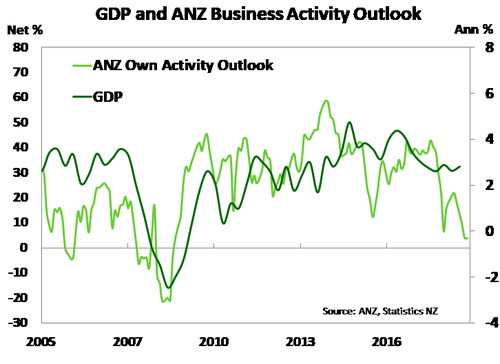 Nevertheless, if you’re in the game of delivering monetary policy, where an economy is heading is more important than where it has been. Because it takes time for policy changes, such as interest rate cuts, to filter through the economy and direct inflation. If it becomes clear growth looks to be stalling, then the RBNZ may need to act sooner rather than later and cut the OCR. But that brings us to the current situation we find the economy in. The economy has not stalled even if confidence surveys suggests otherwise. There remain some decent drivers out there that are expected to help lift growth heading into 2019 to be above 3%yoy.

On the export side, a near-record level terms-of-trade (NZ’s purchasing power with the rest of the world), and recent depreciation in the NZ dollar are a positive. For households, lower mortgage rates and recent increases to government transfer payments (the Families Package) are likely to support spending. Although partly offsetting these drivers, the housing market has stalled in Auckland, and population growth is slowing. Government spending is expected to strengthen as pressure builds on departmental budgets. Investment is somewhat less clear based on sentiment survey’s.

Per-capita growth is another highlight

Another encouraging development was a rebound in per capita growth, which lifted to 0.5% qoq and compared to a flat result at the start of 2018.  Net migration is easing, so if growth strengthens from here, as we expect, per capita growth is likely to look decent compared to recent history.

There was some chaos around the release of the GDP report. Details of the report were released 1-2 minutes early, and the financial markets were trading (strongly) ahead of the numbers hitting the screens. Questions are likely to be asked here.

In the wonderful world of interest rates, yields are higher. We had already seen a lift in yields overnight, because US yields lifted. Our 5-year swap rate has lifted from 2.37% yesterday to 2.53% at time of writing. If US yields, particularly in the long end (beyond 5 years) continue to drift higher, then our interest rate curve is likely to following. The US 10-year rate has held above the psychological 3% level and is currently sitting at 3.06%. By contrast, the Kiwi Government 10-year rate is sitting around 2.68% - well below the US.

Financial conditions are actually pretty good for us right now. Our currency is weaker than it once was, and we have a strong terms of trade. Interest rates are still lower than they once were, and we’ve seen mortgage rates fall. We’re better positioned for stronger economic growth and inflation than we once were. The US Fed are finally doing some heavy lifting, and the stronger USD helps our exports (that are predominately priced in USDs). It’s not all economic doom and confidence gloom.