Winter is coming: as inflation cools to the core and supports RBNZ rate cuts.

Core measures of inflation eased into 2019. 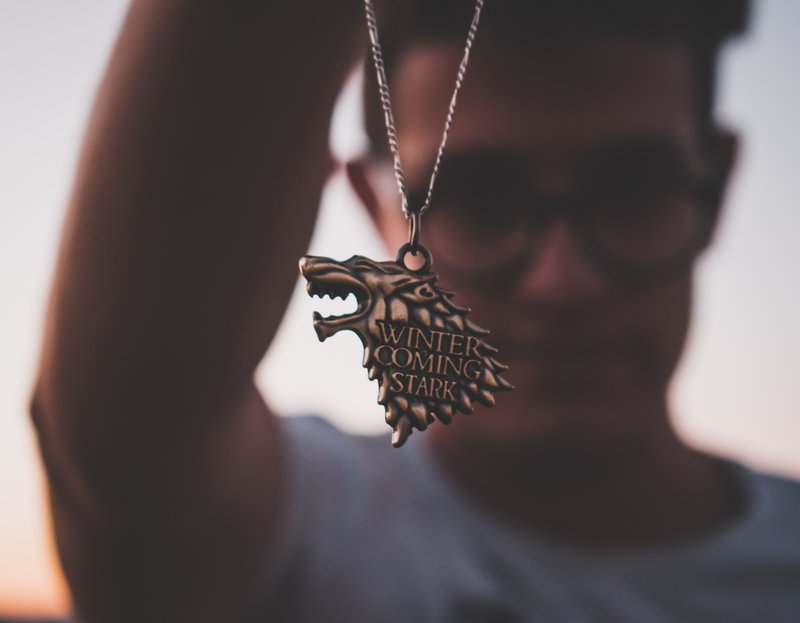 Inflation was much weaker than we and the market had expected in Q1, and even missed the RBNZ’s own weak forecast. Inflation edged 0.1%qoq higher, the same as the December quarter, and meant that annual inflation rate dropped to 1.5%yoy. Once again inflation was driven by the opposing forces of solid non-tradables (domestic) inflation and falling tradables (or imported) inflation.

Domestically generated inflation is stronger, running at 2.8%yoy. But, the outlook is deteriorating. The core measures of inflation took a downward step in Q1, and lost some momentum. Core measures strip out the volatile stuff like cigarettes and petrol. And core measures offer some guidance on future price settings. StatsNZ’s trimmed mean measures (a technical way to strip out volatile price movements) were lower across the board. The loss in price setting momentum concerns us, and RBNZ officials. Given the solid growth we’ve seen, the tightness of our labour market, and the cost pressure experienced by Kiwi firms, we should see higher (pass-on) inflation. The fact we haven’t seen the push higher in inflation, explains the lack of business confidence, and weaker starting point we find ourselves in 2019.

Given a deteriorating economic backdrop, globally, the lower starting point on inflation is a worrying sign for the RBNZ wanting to get inflation back to a 2%yoy target midpoint (or higher). Today’s report gives the RBNZ’s new Monetary Policy Committee plenty of food for thought heading into the May MPS. Today’s report supports the need for a cut in the OCR to 1.50% in May.

There was a swift reaction in markets to the CPI report. The dollar lost a cent to 0.6700 and wholesale interest rates are lower. The market has quickly moved to price a 65% chance of a rate cut in May, up from ~30% chance before the CPI print.  We have been calling for a May rate cut, assigning a 60% chance.  Today’s data suggests there is now a higher probability, closer to 70%. Market traders agree. The chart below shows the sharp drop in headline inflation, relative to recent RBNZ forecasts.  It’s a downside surprise… And the RBNZ have a downward bias. 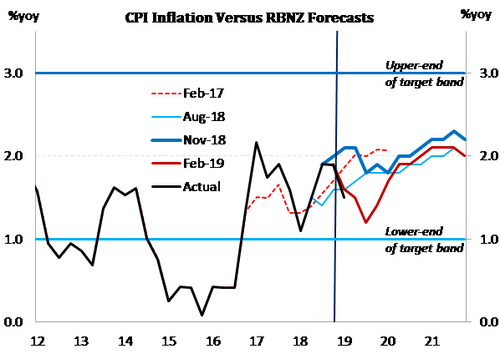 Transport put the brakes on inflation in Q1

As expected transport prices were a key drag on CPI and tradables inflation at the start of 2019 thanks to lower petrol prices. But what was unexpected was the magnitude of the fall. Petrol prices were on average 7% lower over the March quarter. This following a sharp and welcomed drop in the price of oil as many hit the road for the summer xmas holidays. In addition, there was a sizable 12%qoq fall in international airfares in the March quarter, as there usually is at the start of each year. Overall, the drop in transport prices led to a significant 1.3%qoq fall in tradables inflation at the start of the year – much larger than the 0.6%qoq fall we had expected. But it wasn’t only transport prices that were surprisingly soft in the quarter. The prices of household contents were down 0.7%qoq – many of the goods in this group are imported.

Over the last 12 months tradables prices fell 0.4%yoy, as NZ is importing disinflationary forces from the rest of the world (see below). The hit to inflation from petrol prices is likely to be short-lived as prices have been trending higher since the start of 2019 with rising oil prices and a depreciating currency. And we wouldn’t expect to see such a large fall in tradables inflation as we move through 2019.

Non-tradables inflation works the other way.

Non-tradables inflation worked in the opposite direction to imported inflation in the March quarter with a 1.1%qoq lift. This was slightly lower than we had been expecting. The usual first quarter suspects drove non-tradables inflation. Including the annual jump in ciggy prices due to higher tobacco excise pushed up the alcohol and tobacco group 4.7%qoq.

There are clearly signs of capacity pressures in the economy evident in domestic inflation. But for such a long time now these pressures have remained isolated to certain pockets – namely housing and construction. The housing group within the CPI was 0.6% higher in the quarter, both construction costs and rents were again the key factors driving inflation here.

On an annual basis non-tradables inflation looks to be gathering pace, rising to 2.8%yoy from 2.3%yoy in the March 2018 quarter and was the highest level since early 2014. However, the worm might be turning considering recent data developments. A weaker global outlook, coupled with moderating growth at home would likely lead to increased capacity in the economy and less domestic inflation.

Soft to the core

Measure of core inflation provided by StatsNZ look to have lost some momentum at the start of 2019. Given a deteriorating economic backdrop this is a worrying sign for a central bank wanting to get inflation back to their 2%yoy target midpoint. Today’s report gives the RBNZ’s new Monetary Policy Committee plenty to think about heading into the May MPS.

Stripping out some of the more volatile components, i.e. inflation less food, energy and petrol prices inflation was unchanged at the start of 2019 at 1.5%yoy.  StatsNZ’s trimmed mean measures (a more technical way to strip out volatile price movements) were lower across the board. As is tradition, the RBNZ will release their own measure of core inflation at 3pm today, the sectoral factor model, and markets will be keen to see how this has fared. 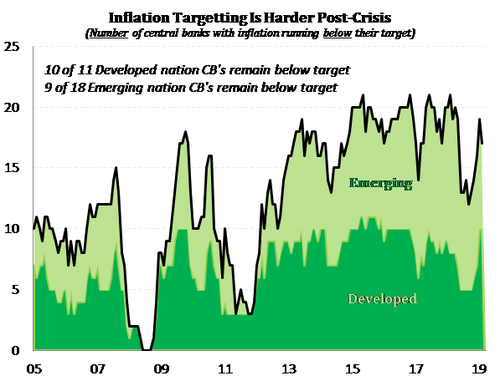 most nations in the 2009-2019 post-crisis period. We’re importing that disinflationary force.

Most economies have generally failed to generate the inflation we’d expect so late in the expansion. Phillips’ curves have flattened, and even inverted in parts (including New Zealand, the home of the Bill Phillips curve). Now the risks to global growth have worsened.  We’re starting from a lower than expected run rate.  And if conditions deteriorate, the run rate will decline, further. Central banks have become more cautious as a result. Thoughts of interest rate hikes have almost uniformly morphed into thoughts of interest rate cuts. The next stage is the delivery of rate cuts. And we think the RBNZ will have a slice in May. 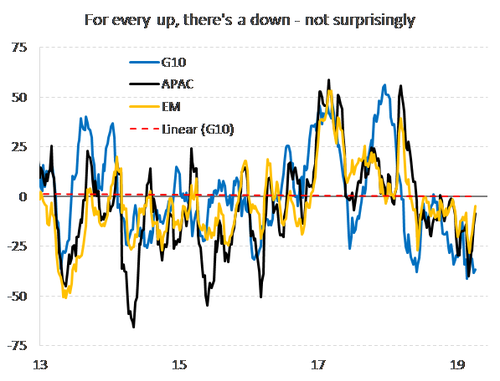 Kiwi interest rates were slammed following the inflation print. One to ten year rates fell 11-to-9bps, respectively. The curve is a little steeper as expected, as imminent rate cuts are priced in.  The rates market has moved closer to the RBNZ’s DOWNside OCR track – see the blue arrow in our chart.

So what has happened? Well, it’s bad. But, we expect bad now. 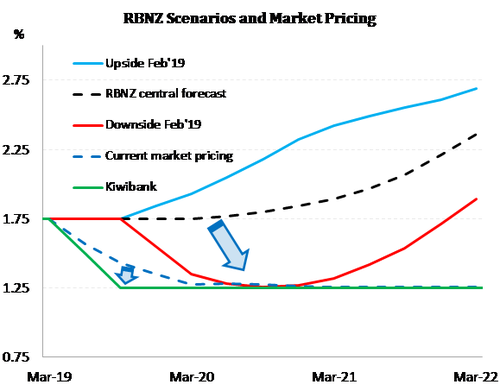 The Citibank “data surprise” indices have improved in EM and APAC in particular. But in the G10, the data has continued to disappoint – mainly out of Europe. Brexit has been kicked down the road, a little further.  And we keep hearing about a US-China trade deal being signed any day now. Traders have collectively breathed out a sigh of relief. According to BBerg data, the amount of bets being taken out that US Treasury yields will RISE (not fall), has increased substantially. We like monitoring the so-called “smart money”. You know, the money that runs around and eventually blows up and takes the rest of us with it.  Yeah, that money. The smart money is playing upside risks now, just as the downside risks have been overplayed a little recently. Why do we care?  Well markets can easily run higher for a while yet. The US-China trade deal will cause a spike in equity market love. And once that’s run its course, well, the economic reality is still pretty bleak to be fair. We’ve been surprised at how quickly the global economy has lost momentum.  And that’s the main reason for the RBNZ’s change in tune in March.

An RBNZ rate cut in May would have better bang for buck in a world where other market are improving (temporally).