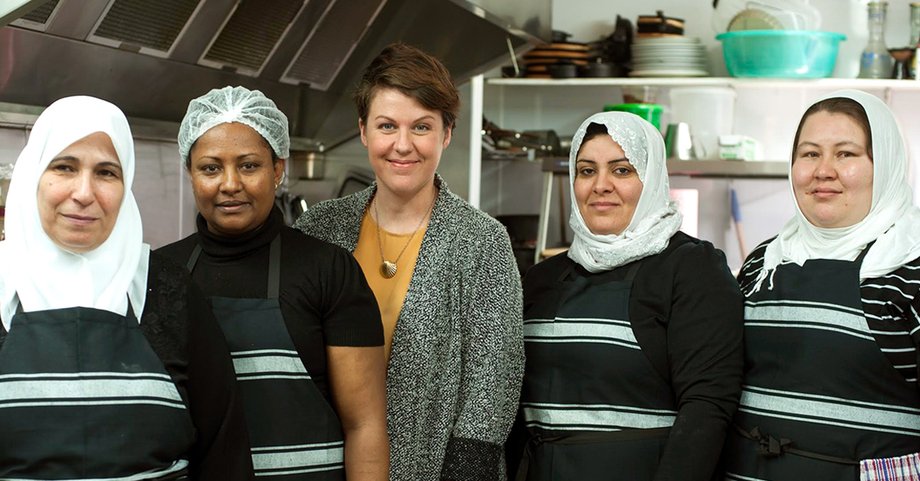 Can you make a profit AND make a difference? Kiwi social enterprises are on a mission to show it’s possible to do good and make money at the same time. A major international conference hosted in Christchurch last September brought together social entrepreneurs from all over the world, and shone a spotlight on New Zealand businesses trying to create social change.

Companies are traditionally thought to to focus primarily on financial success, but a growing number of Kiwi entrepreneurs are showing that business can be used as a tool to make the world a better place.

Social enterprises are businesses that are financially self-sustaining and have a positive social impact. They might be tackling social issues, improving communities or searching for solutions to environmental problems.

While the term ‘social enterprise’ is relatively new in New Zealand, the concept isn’t. Over the past few decades, many organisations have starting selling goods or services to create social change.

Social enterprises can have many different business models and are in a wide range of industries,but all reinvest their profits in their chosen cause.

They also tend to be transparent – they’re expected to be open and honest with consumers, investors and their own staff about the impact their work is having.

Fast-growing Kiwi social enterprises include Pomegranate Kitchen, a catering company that provides Wellington workplaces with delicious meals made by former refugees,and Thought-Wired, a tech company that uses brain-sensing technology to enable people with severe physical disabilities to interact with the world around them.

Eat My Lunch, one of New Zealand’s best-known social enterprises, has a simple business model: for every lunch ordered by a customer, Eat My Lunch delivers a freshly-made lunch to a Kiwi kid in need. It now delivers 1400 free lunches to children at 40 schools every weekday.

In September 2017,Christchurch will host the Social Enterprise World Forum. Held in a different country each year, the forum will bring together an estimated 1200 social entrepreneurs, funders, community leaders and policymakers to share ideas, build networks and discuss how to create a more sustainable future.

Julia Jackson, Kiwibank’s Corporate Social Responsibility Manager, says social enterprises tend to be new businesses launched to respond to a specific need, or existing charities that start a revenue-generating business in response to the in creasing competition for charitable dollars.

For example, the Mental Health Foundation has created The Well being Game, which encourages people to be more aware of the things they can do to support their own mental health and well being. The game can be licenced to businesses to use for a fee.

“We need to grow the businesses that are looking at some of the big social and environmental challenges facing us, and to have charities that are increasingly self-sufficient,” says Julia.

“If we get it right, that’s a good thing for New Zealand.”

Time for New Zealand to step up

Ākina Foundation general manager Louise Aitken says the New Zealand social enterprise sector has made great progress over the past few years, but is still smaller and less mature than the sector in other parts of the world.

“It’s not just about finding a way to make a widget at the same price as someone else. It might be about having those widgets made by workers with a disability, or ploughing the profits from sales of the widgets back into the community,” says Louise.

“There’s nothing wrong with profit – making a profit means you’re going to be sustainable.”

She believes New Zealand’s small size works in our favour, as it’s easier for social enterprises here to tap into supply chains and gain access to local and central government.

To help grow the sector in New Zealand, Kiwi social entrepreneurs may need support such as training, mentoring, a strong marketplace and access to capital to scale.

The rise in social enterprises coincides with a rise in ethical investment. As society begins to gain a better understanding of the economic, social and environmental impact of businesses, social enterprises are becoming more attractive to investors.

Highlights of the forum included a pitch Olympics, where social entrepreneurs could pitch to investors, and a Kiwibank-run mentor bar, where people could ask for advice on tricky issues such as legal and financial questions.

Keynote speakers included Sir Ray Avery, whose inventions have made cataract surgery accessible to some of the planet’s poorest people, and Sir Tim Smit, co-founder of the Eden Project, the world’s largest indoor rain forest.

“Holding the forum in Christchurch is one of the reasons we won the bid,” says Louise.

“Social enterprises are about creating a new tomorrow, and that’s a journey Christchurch has already been on.”

Interested in the world of social enterprise? Join the conversation, get inspired and find out more about the businesses built to give back.