Consumer spending is holding up, for now.

Consumer spend is holding up, for now. Kiwibank electronic card spend rose 3.1% in the September quarter. Historically low unemployment continues to support households’ income, and in turn, consumption. Households however are faced with a tough trio of rising interest rates, elevated cost of living, and falling house prices. In an increasingly expensive environment, the appetite to spend weakens. Evidence of this is already piling up. When adjusting for inflation, consumer spend rose by a lesser degree, up 2.1%. And a third of the spend categories we monitor recorded a drop in the volume of transactions made over the quarter. All were concentrated within the discretionary spending space. A slowdown in consumption however is by central bank design. It’s needed to cool demand, restore balance in the economy, and ultimately, return the inflation beast to its cave.

Kiwibank electronic card spend rose 3.1% in the September quarter. Supported by historically low levels of unemployment, consumer spending appears to be holding up. Although, the rise in consumer prices is working behind the scenes. High inflation is helping to prop up the value of transactions. When adjusting for inflation, consumer spend rose by a lesser degree up 2.1%. And slower than the 5.2% increase last quarter. The widening gap between nominal and real spend underscores the rapid rise in consumer prices.

The slower rise in real spend also suggests that Kiwi are tightening their belts. Evidently, the growth in dollars spent is outpacing the growth in the volume of transactions. It appears that the number of times Kiwi tapped, swiped and inserted their cards is slowing. And in September, the volume of transactions was unchanged from the prior month.

The outlook for consumer spending is weakening. With rising interest rates, high living costs and falling house prices, the appetite to spend up large is waning. 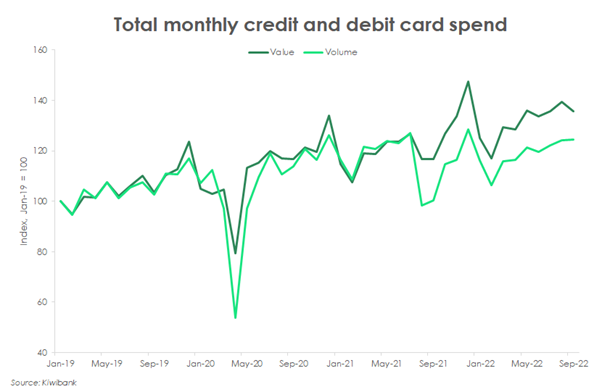 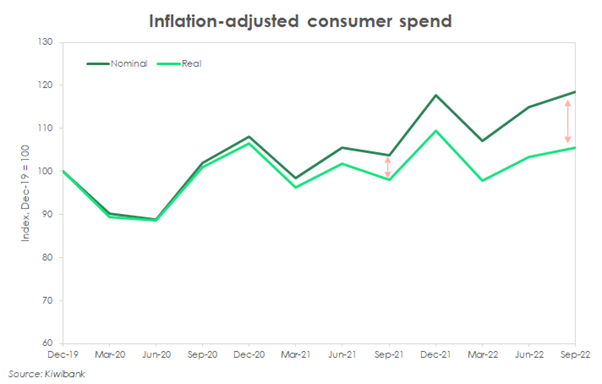 The Covid-19 traffic light system was scrapped in the middle of September. And as restrictions lifted, the composition of consumer spend continued to evolve. Services are more accessible and spending is rising as a consequence. Evidently, retail goods are falling out of favour.

Total spend on goods dropped 0.7% over the quarter, while spend on services grew 11%.

Compared to a year ago, spend on services is up a massive 32% - albeit from a very low base. The chunky double-digit growth underscores the highly disruptive nature the covid restrictions had on the services industry. The recovery continues. 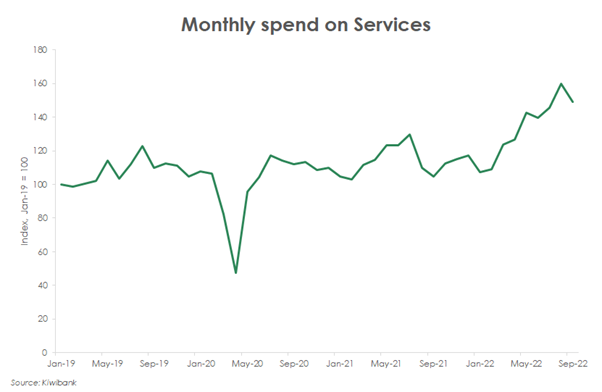 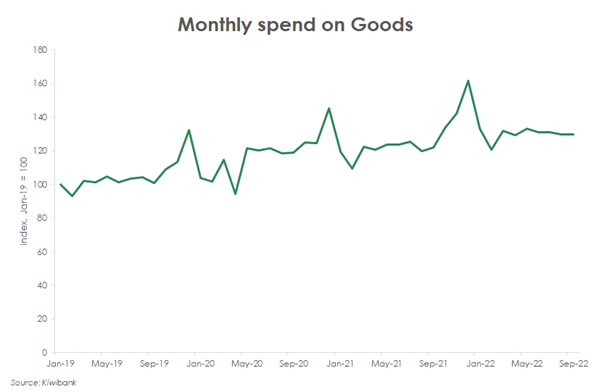 Entertainment spend rose 10% over the September quarter. And spend on sporting events was especially strong, up almost 5%. Between July and September, there were plenty of opportunities to watch our national sports teams perform on home turf. The All Blacks may have struggled. But looking at our spend data, there’s no questioning fan loyalty. The July Steinlager series had packed out the stadiums, and Kiwibank card spend rose 8.7% in the month alone. With the Women’s Rugby World Cup kicking off last weekend, there’s reason to see spending on sports continue. Go the Black Ferns!

The annual New Zealand International Film Festival also took place in July/August. Kiwi had the chance to watch the stars shine on the silver screen. The number of transactions made on movies and ticketing agencies lifted 20% in the July month alone. The return of international acts also continues to support spend on entertainment. 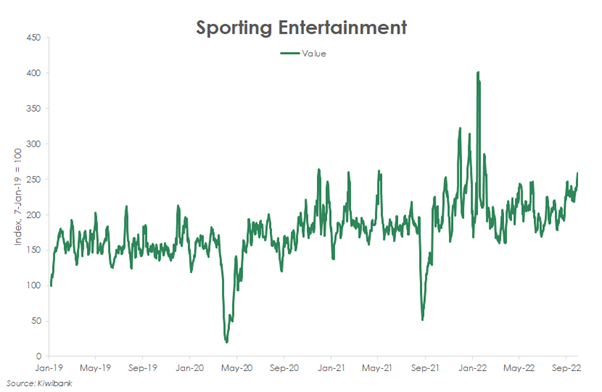 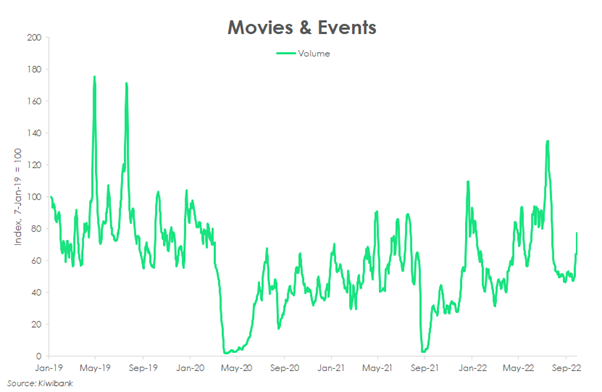 End of an era

Two years of a closed border meant two years of spending on everything from pools to pizza ovens (next slide). But the spend up has run its course. Spend on retail goods fell further over the September quarter, down 1.6%.

The rising interest rate environment poses a challenge for retailers as households tighten their belts. The upcoming holiday season however holds promise of a boost to spending.

Between secret Santa and stocking fillers, the December quarter typically sees a spike in spending. But even before the jingle bells ring, the seasonal spend up starts with Black Friday. Kiwi have welcomed the American tradition with open wallets – especially those looking to get their Christmas shopping done early.

What a difference a year makes. Last year, shipping costs were elevated and ports congested. There was question over how stocked the shelves would be in time for the holidays. But several indicators show that pressure on supply chains are now easing and capacity is growing with more ships being built. Today, the question mark hovers over demand. With interesting rates significantly higher than a year ago, will households be in a spending mood? 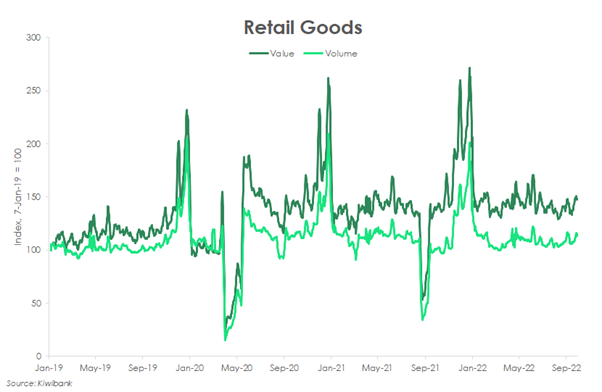 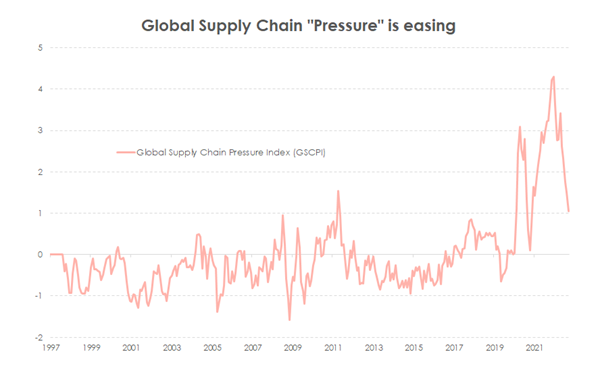 Globally synchronised (aggressive) monetary tightening, the unfolding energy crisis across Europe, and weakening demand in Asia – the global growth outlook is dimming. Naturally, commodities have slumped also. Oil, in particular, has tumbled substantially in the past three months. And petrol prices across Aotearoa have reflected the fall.

The value of petrol spend fell 4.1% in the quarter, a consequence of the drop in prices. The decline in spend may also have been a consequence of the fewer transactions made. Looking at volumes, it appears that Kiwi were made fewer trips to the petrol station, down 2.2% from the previous quarter.

On the other hand, there remains healthy demand for public transport. Especially as the government announced an extension to the half-price discount on fares until January 2023. The cheaper alternative way of getting around remains a popular choice. Over the quarter, the volume of public transport transactions jumped 10%. The substitution play continues.

But an even cheaper alternative to getting to work is to walk…down the hallway. Working from home is also a big factor reducing our petrol consumption. And the benefits are wide-ranging. A longer sleep-in, shorter commute, and a cleaner climate. 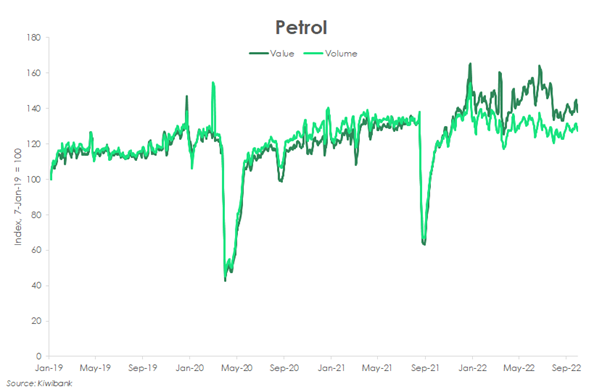 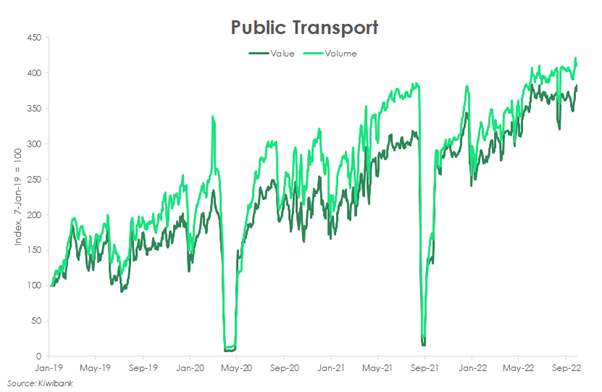 2020 will be remembered for many things, one of which will be the exorbitant sending on all things housing. Kiwibank spending data supports the countless anecdotes of Kiwi DIYing, everything from renovating bathrooms to installing pools. And with the adoption of working from home, many sought to create a home office. There was fresh demand for office equipment.

But now Kiwi are fully decked out, and much has changed since 2020. Consumer confidence has weakened, credit is harder to get, and the housing market is in retreat. Households are just not in the mood to splash out on big-ticket items anymore.

By consequence, housing-related spend continues to fall. Following the 1.6% drop, spend fell another 4.5% in the September quarter. We’re making fewer purchases on household contents & furnishings, down 3.4% and sitting below 2019 levels. Similarly, the volume of transactions on home electronics dropped 2.4%. Kiwi are also putting down the tools, with the number of trips to hardware stores virtually unchanged from the prior quarter.

As house prices continue to fall, the wealth effect will continue weaken and spending alongside it. Weaker appetite to spend on the house is a clear sign that demand in the economy is  cooling. 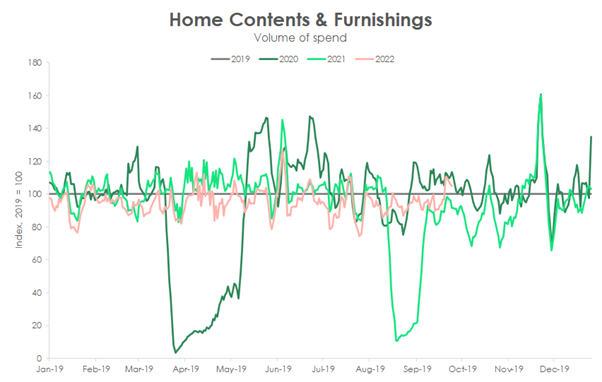 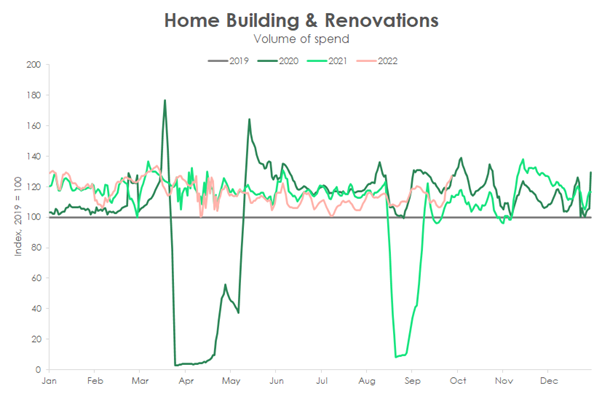 An interesting development over the past year has been the renewed demand for cash. Over the covid pandemic, there was an understandable aversion to handling and exchanging cash. Today, the volume of cash withdrawals has taken a step-change higher – up 70% compared to a year ago.

The resumption of international travel as our border reopened may explain the sudden jump in cash withdrawals. When travelling abroad, it’s handy to have cash on you.

The demand for cash also appears to have coincided with a slowdown in the number of online purchases. Over the pandemic, we witnessed a tec(h)tonic shift toward digital commerce. Though storefronts were boarded up, households continued to shop – click and collect style. But Kiwi are now redirecting their spending toward services. The number of online purchases has fallen back to 2019 levels. 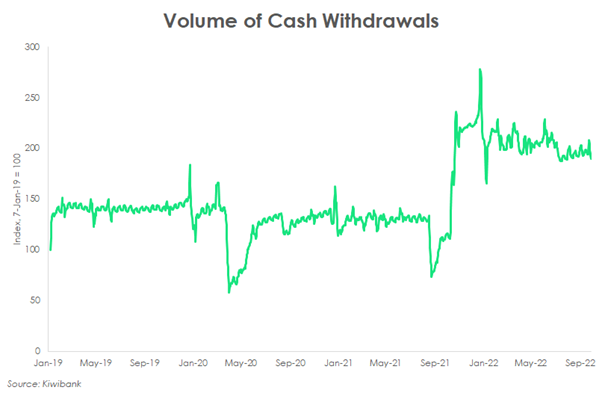 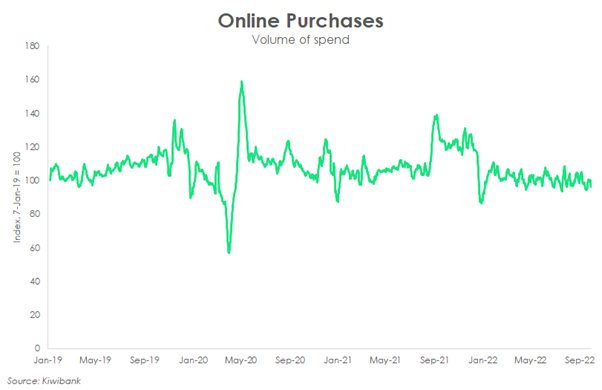 The outlook for consumer spending is weakening. Households face a tough trio of:

In an increasingly expensive environment, the appetite to spend wanes. A slowdown in consumer spend however is by central bank design. Interest rates have been jacked up to cool demand, restore balance in the economy and ultimately, to return the inflation beast back to its cave.