Heat from the housing market is becoming unbearable. The RBNZ is set to do more to extinguish the fire. 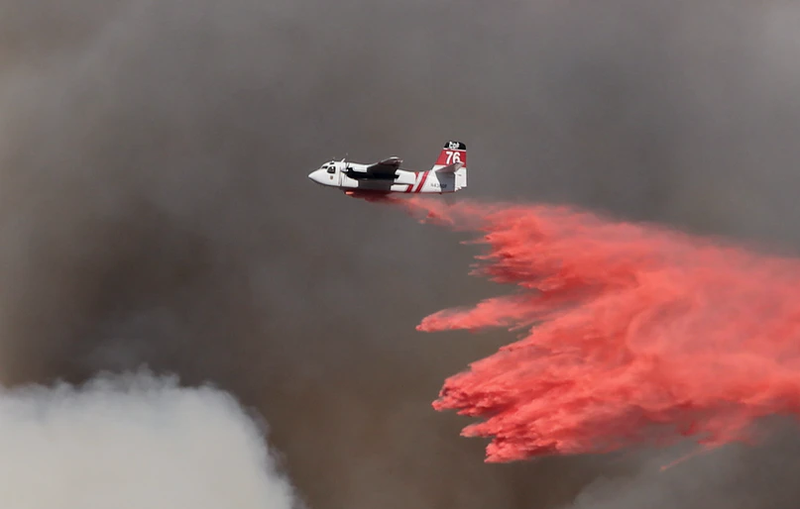 The REINZ’s latest data for July showed there is still plenty of heat in the housing market. Market supply is constrained and house prices are surging. The REINZ house price index (HPI) was up over 2% higher in July alone. Annual house price growth hit a new high of 30.5%. And the median house price across the country hit a new record at $826k.

But signs of peak house price growth in the current cycle are there. The 7,187 sales recorded by REINZ were 11.7% down on last year. Seasonally adjusted sales fell almost 3% in the month. Over the last three months sales have averaged around 7,500. That’s down 14% on the average seen over the last quarter of 2020. Weaker sales are significant. Because where sales go prices generally follow. However, the current cycle is different, and prices look to be taking longer to respond. Sales are falling at the same time available property listings have hit record lows. According to realestate.co.nz the number of available listings were 35% lower than last year. As a result, measures of slack in the market remain indicative of a sellers’ market. The median number of days to sell a property lifted a day to 29, still a full 10 days lower than the historical average.

Nevertheless, the headwinds for the housing market are picking up pace. Fixed mortgage rates have already started to rise in anticipation of OCR rate hikes. And mortgage rates will be even higher this time next year. The RBNZ is set to deliver the first in a series of rate hikes next week at the August MPS. And macro-prudential policy is being tightened further.

The heat from the housing market is getting a little too hot to handle. The market just hasn’t responded quick enough to recent policy changes targeting property investors. High-risk debt continues to build so financial stability concerns have pushed the RBNZ to act. And now the RB has a directive from the Minister of Finance “…to have regard to house price sustainability when making financial stability decisions”. A green light to use debt-to-Income lending restrictions has been given. Meaning the RBNZ has a larger firehose to douse the market with. 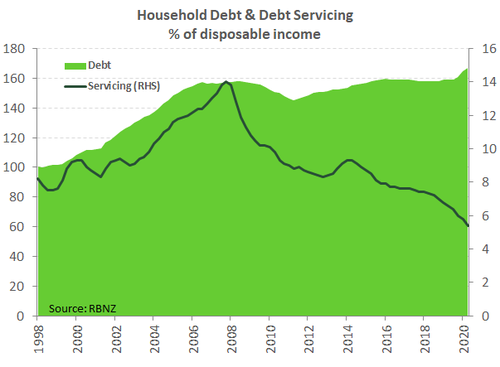 Last week Deputy Governor Geoff Bascand announced that the RB will consult on tightening macro-prudential policy further. And in the realm of macro-prudential policy, ‘consult’ means the RB is tightening policy further. For owner-occupied lending from 1 October no more than 10% of new lending (down from 20%) can go to those with less than a 20% deposit. The move will come down hard on first home buyers. One of the biggest hurdles first home buyers face in the current market is pulling together a large enough deposit. Even as debt serviceability has fallen (see chart above) to levels FHBs can afford, rampant house price growth is easily outpacing savings growth. A 20% deposit in some markets at present represents big bickies. Banks will be constrained in how much lending they can do for those with small deposits. And Banks will need to move soon to restrict lending and meet the 1 October deadline.

Restrictions including DTIs and/or test interest rate floors will be part of the RBNZ’s consultation period starting October. And the RBNZ has signalled a 6-month implementation period for DTIs. That suggests we could have DTIs in place from early 2022. In the meantime, test rate floors could be imposed sooner.

From an operational point of view, banks would much prefer a test rate floor. Test rates are already used by banks to examine borrowers’ ability to service mortgages should mortgage rates rise in the future. Imposing a minimum test rate would be fairly straightforward. DTIs on the other hand require work to update serviceability assessment systems. 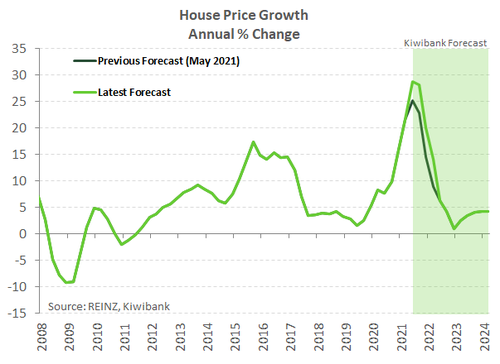 Any further policy changes will occur at the same time we see the RBNZ hiking the official cash rate. Combined, these policy changes will lump more straw on the camel's back. Additional macro-prudential policy should see house price growth ease steadily through the remainder of this year and into next. We are still sticking with our forecast of house price growth slowing to around 1% by the end of next year. The ongoing shortage of property will ensure prices don’t ultimately fall.

The word on the street

We recently surveyed Kiwibank’s Mobile Mortgage Managers (Triple Ms in banking lingo), and Bank Managers on what they are seeing on the ground around Aotearoa. The trends seen in the aggregate match the experience of fellow Kiwibankers on the ground. A universal theme is the lack of listed property, which is adding upward price pressure:

“Not many new listings but those that do list sell quickly… construction seems to be on the rise. Investment market has dropped off.” Neal Jacks, South Canterbury

“There is still a massive housing shortage so I feel that lack of stock will keep prices high” Shayne Hawtin, Wellington

“There is a chronic lack of supply. prices seem to be holding and not escalating… the first home market remains very active.” Garth Hutchison, Hawke’s Bay

“…we have noted some decrease in activity on properties where price expectations are a little higher.” Leanne Hannah, Dunedin

“My clients are telling me that open homes are quieter with less people however still enough competition to make it very competitive and prices remain at same levels.” Shayne Hawtin, Wellington

“Overpriced houses are now remaining on the market so there seems to be some scepticism in the market. There are less people panic buying.” Garth Hutchison, Hawke’s Bay 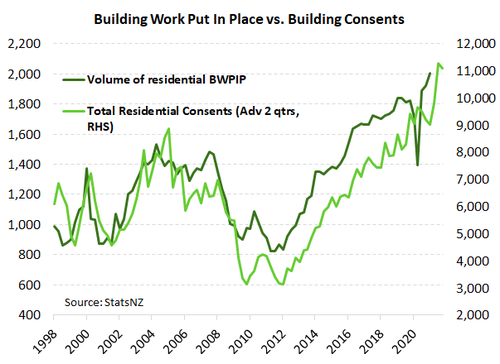 The lack of supply is leading to more construction activity. A trend confirmed by residential building consent data, which continue to hit multi-decade highs. Encouragingly, a surge in multi-dwelling units are evident in Auckland. For existing owner-occupiers across the country looking to move up the ladder, the lack of listed property is forcing many to renovate or add to exiting property. Unfortunately, as is the case for new builds, the lack of materials and builders is putting a spanner in the works.

“More consents to build have been issued but there is delay with builders and materials. Alterations and renovations are more popular now given the lack of homes on the market. People are content to stay where they are, however, are prepared to spend on their current home to get what they want.” Garth Hutchison, Hawke’s Bay

“We have a lot of construction going on, a lot of property developers building 5, 6, 7 units on once was a one house section.” Tammy Watene, Auckland

“…multi complex is going off and also townhouses 3 to 5 to a section” Joe Tongotea, Auckland

“Construction is a concern with the wait times and availability of materials, and this may put people off this sector until things settle, which of course then has a flow on effect on supply” Brent Hefford, South Island

In some parts of the country, a lack of available land for residential development is a big concern.

“Don't think situation is going to get better until we can get more land released and we are able to get materials from overseas to be able to keep up with building new houses” Jenny Taylor, Auckland

“The supply of new land for housing has almost dries up with any new land rezoning pushed out to 2023. So, the overall housing shortage will get worse in the short term, pushing prices up”. Murry Nelmes, Bay of Plenty

High house prices in our largest cities and a preference to exit the “rat race” continues to drive an exodus to the regions. And a revitalised Christchurch, which still offers bang for buck, has the pulling power to attract buyers.

“[I] see it hotter in Horowhenua as people chase the quarter acre. Kapiti will ease as we see the mad rush to get in before Transmission Gully opens end and less people returning from overseas” Tracy Nyhan, Kāpiti/Horowhenua

“We are also seeing more and more customers selling up in Auckland and purchasing in the Coromandel with the ability to work from home or be cashed up if they have retired.” William Howard, Thames Coromandel

“It's crazy hot and extremely busy.  Lots of outside region buyers - more than I have ever seen - purchasing rentals in ChCh. Lots of people moving into ChCh for affordability reasons - ironically forcing prices up at rates we have never seen here before.” Alan Bush, Canterbury

Tax changes announced earlier in the year, such as making interest payments a non-deductible expense, has cooled enquiries from investors. Although interest in new builds from investors has crept up – due to new builds being exempt from the tighter bright-line test. Despite some investor interest having pulled back, there are plenty of demand to fill the void. Demand from owner-occupiers, cashed up investors, and investors able to leverage the massive rise in equity built up over the last year.

“I have seen a few customers sell existing rentals because of the changes - but these were knee-jerk reactions and have not been sustained with other customers. If anything, lately I'm seeing an increase in investor activity driven by FOMO due to the shortage of housing stock.” Alan Bush, Canterbury

“I don't believe it has slowed the market. I think investors are looking at a longer term to realise the gain and choosing investment properties more carefully to meet the Government Regulations.” Debra Norton, West Coast

“There has been a drop in requests to purchase investment property, a number selling up and a few top ups to meet healthy homes standards.” Neal Jacks, South Canterbury

“Definitely has reduced enquiry for investors, but I don't have any knowledge of current investors selling up in anticipation of the removal of interest deductions.” Murry Nelmes, Bay of Plenty

“Starting to see less investor enquiry, although those that do enquire are first time investors want to hold on to their current house as a rental, and buy a new one for themselves and even though 40% is now required, this is usually easy because of the big capital gains of the last 12 months.” Donna Neville, Bay of Plenty

Looking ahead Kiwibank lenders have an eye on future interest rate rises which are expected to cool activity in their respective regions.

“There appears to be no sign of slowing at this stage although if interest rates move in a northerly direction this may cool things off a little.” Angela Bycroft, Taumarunui

“Prices still increasing however % increase to reduce to lower level over the next 12-24 mths as interest rates increase.” Craig Wrigley, Waikato

“Pricing remains competitive but talk of an increase to home loan rates has caused a flurry of activity with customers looking to refix their loans longer term. If rates do rise steeply this will certainly put a brake on peoples borrowing capacity and willingness to take on large loans and invest in renovations/improvements.” Richie Owen, Wellington/South Island