The outlook for the housing market darkens further. 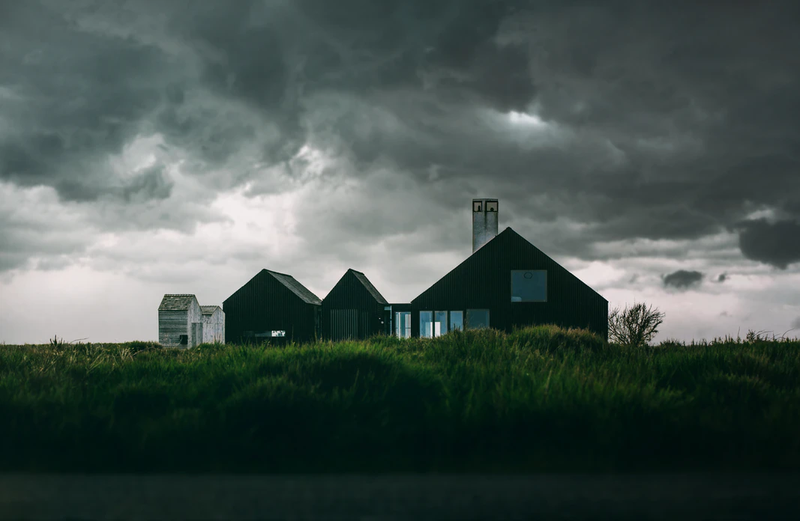 Hampered by tightening credit conditions, the housing market continued to cool in February according to the latest data from REINZ. The house price index (HPI) recorded a modest 0.5% gain in the month. However, the data overall paint a picture of a market in decline. Seasonally adjusted, house prices recorded their third consecutive monthly decline. Annual house price growth decelerated further in February to 14.3%, that’s more than half of the peak seen last August. The near 5,600 sales recorded by REINZ in the month were 32.8% down on the level of sales seen in February last year. And, in a clear sign that the market is slowing, the median number of days to sell jumped 6 days to 38. That’s almost back to the level seen during the delta lockdown of last year and the historical average of 39 days. Omicron may have contributed to the jump in days to sell. Some potential participants perhaps reluctant to engage in the market – say via open homes – with the cases of covid surging in the community. Auckland, the worst omicron hit region, saw days to sell surge 12 days to 42. The rise in days to sell is coinciding with a turnaround in the available listings according to realestate.co.nz (see chart). 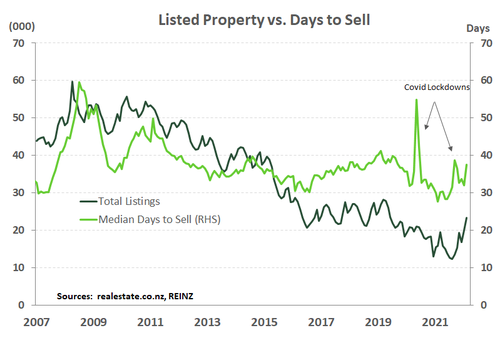 Nevertheless, tightening credit conditions remain the main inhibitor of demand in the housing market. The changes to the Credit Contracts and Consumer Finance Act (CCCFA) introduced late last year tightened the screws on mortgage lending at the start of 2022. The news that the Government has moved to relax some lender requirements is certainly welcome. But tweaking CCCFA changes won’t rescue the market from future price falls. There are bigger forces at play. Forces such as rapidly rising inflation both here and abroad. Omicron is pushing up domestic generated inflation in an already capacity constrained economy. Meanwhile the war in Ukraine has seen commodity prices (such as oil prices) surge. The RBNZ’s fight to rein in inflation is likely to see mortgage rates rise further in future. We see the RBNZ lifting the cash rate to 3% by next year. Mortgage rates are already adjusting upwards to this new reality.

Regional housing markets are cooling in unison. Although the rate of the regional slowdown varies across Aotearoa. Auckland, which tends to lead the NZ market, has seen house price growth drop to just above 10% from the middle of last year. Likewise, the bottom of the North Island – previously the hottest markets around – have experienced some epic falls in house price growth. Canterbury continued its soft landing in February. House prices lifted 1.7% in the month, and while annual house price growth eased to just below 30%, the median house price jumped almost 11% in the month to $720,000. In addition, regions surrounding the City of Sails, also seem to be experiencing a softer decline. For instance, Northland’s house price growth still exceeds 20%.

Based on recent developments we have updated our house price forecast. We see annual house price growth recording outright falls from the second half of the year. A 3% fall in prices is expected in the December quarter. Our forecast suggests a cumulative 5% decline in house prices by the start of 2023.

Our expected fall in house prices remains far more muted than other forecasters. There are two main reasons for this. First, as mentioned previously, we see the labour market providing households with a solid shield against a major income shock. The NZ labour market remains a point of strength for NZ households not weakness. The unemployment rate is predicted to remain below 4% this year and next. Mortgage holders are expected to be able to continue to service mortgages and tenants pay their rent. In the absence of a recession induced spike in unemployment, we think there will be less forced sales and downward pressure on house prices as a result. We acknowledge that the painfully high inflation, particularly from record petrol prices, is hitting consumers in the pocket. And combined with omicron disruption, the risks of a recession in 2022 have risen. But a recession is viewed as a risk, not our central forecast. 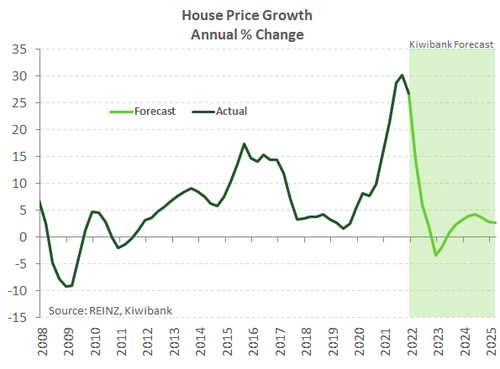 Secondly, the expected jump in the supply of new housing this year, based on past building consents data, is being delayed. The construction sector is facing major material and labour shortages, currently made worse by omicron. The housing shortage in Aotearoa, while having diminished during the covid crisis, is still present. Nevertheless, we expect planned supply to eventually come online, which will keep any recovery in house prices muted.