A pause for [limited] effect, as we standby for a lower OCR ahead 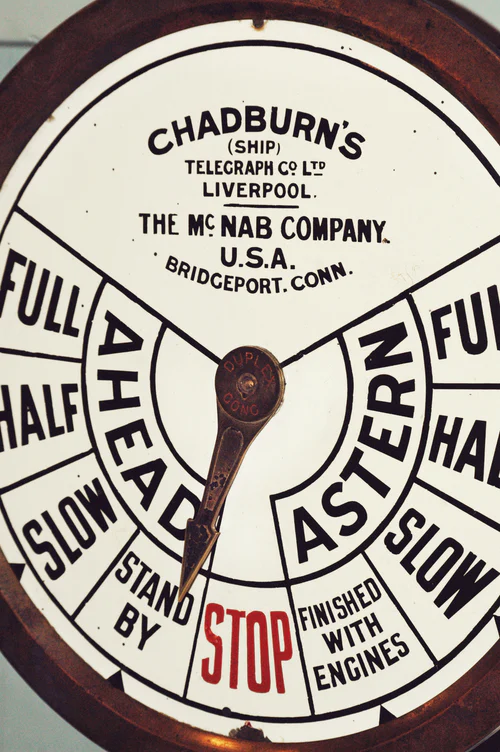 The RBNZ sits tight at 1.0%, but a cut in November is still on the cards.

The RBNZ’s Monetary Policy Committee (MPC) delivered what was widely expected. The OCR was unchanged 1.0% and the accompanying statement maintained that further policy stimulus might be needed. The RBNZ is in wait and watch mode, after delivering an outsized 50bp cut in August. The one-page statement and summary record of meeting made it clear that developments haven’t changed substantially from the August MPS. And in the August MPS the RBNZ’s forecasts pointed to a decent 40% chance of more action.

The MPC stated that it is pleased how financial conditions have evolved following August’s cut. Financial conditions (through lower interest rates and a lower currency) are supportive of growth. The currency is tracking well below even the RBNZ’s MPS forecast, and banks have been trying to outdo each other with new record low mortgage rates. But what’s important is how this translates into real activity and inflation. Going by recent business and consumer confidence data we will have to wait and see. Because we haven’t seen anything yet.

Has the OCR has troughed in this cycle? 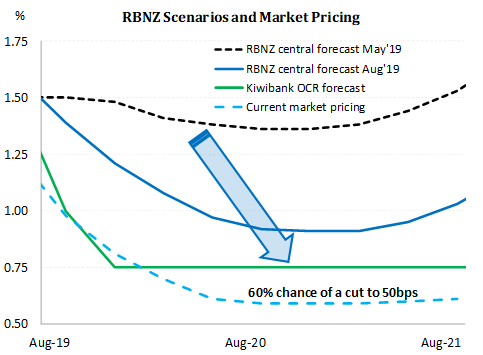 No, unfortunately not. We’re anticipating another cut in November to 0.75%. At which time, we will consider adding another cut to our trajectory to just 0.5%. For now, we assign an uncomfortably high probability of a move to 0.5% at 40%. We said the same thing about a move to 0.75% in March of this year. So, the direction of change has been down, and remains weighted (heavily) to the downside. What’s missing, is not a monetary policy response, it’s fiscal. It’s high time for the Government to inject much needed investment.

We will get more monetary stimulus. But what’s needed is expansive fiscal policy. Central banks around the world, including the RBNZ, are calling for Governments to step up and do their part. Departing ECB president Draghi said: “Now is the time for fiscal policy to take charge”. And in New Zealand, we have no funding excuse. Funding is cheap, and in ample supply. There’s nearly $17 trillion invested in government bonds with NEGATIVE interest rates. Those (predominantly foreign) investors would love to see more Kiwi Govies to buy at +1%. And we could issue +30-year bonds for international insurance companies, super funds and locals ACC and NZ Super. It’s not hard.

The Kiwi flyer is gliding lower

The pivotal point of the Kiwi curve, the 2-year swap rate, has dropped from 1.75% in April to just 0.92% (-83bps). Bank’s use wholesale swap rates to offer fixed-term mortgage rates. The RBNZ’s OCR did enough to appease rates traders, with only a very small lift in wholesale interest rates (as some had covered the risk of a cut today).

We continue to forecast a volatile descent for the Kiwi, to 61c. And we wouldn’t be surprised to see the Kiwi test 60c at some point this year. If the RBNZ continue to 0.75%, then we expect the Kiwi to experience another leg lower to 58c. Threats of recession globally, and therefore locally, could put even more pressure on the bird.

If you’re an exporter, these measures are aimed at you.

If you’re an importer, hedging exposures to a declining currency can assist.

The RBA left the cash rate unchanged at 1.0% earlier in the month. The accompanying statement has flagged the likelihood of more rate cuts to come. And we see the RBA’s decision to hold as just a matter of timing, not direction. The RBA is still likely to cut in coming months, and we expect a move to 50bps in early 2020.

Why does a Kiwi bank care about an Aussie central bank? Well, Australia is our second largest trading partner. And our economies face similar global forces. The RBNZ and the RBA have the same level OCR at 1%. The RBA is dealing slowing growth, and weakening inflation. There has been a shock to credit creation, with the Aussie banks tightening the purse strings following the Royal Commission. House prices are still falling, albeit at a slower rate. Household consumption is weakening. Growth has disappointed. And inflation is weaker than expected. The labour market has remained tight, with a low unemployment rate, but the outlook is clouded.  Sound familiar? New Zealand also has a tight labour market, but we’re wary of where we may end up this time next year.  It’s a global phenomenon.

We expect the RBA to cut to 50bps, and that supports our view the RBNZ will cut to 75bps, and may follow up with another move to 50bps early next year.

The Official Cash Rate (OCR) remains at 1.0 percent. The Monetary Policy Committee agreed that new information since the August Monetary Policy Statement did not warrant a significant change to the monetary policy outlook.

Employment is around its maximum sustainable level, and inflation remains within our target range but below the 2 percent mid-point.

Global long-term interest rates remain near historically low levels, consistent with low expected inflation and growth rates into the future. Consequently, New Zealand interest rates can be expected to be low for longer.

The reduction in the OCR this year has reduced retail lending rates for households and businesses, and eased the New Zealand dollar exchange rate.

Low interest rates and increased government spending are expected to support a pick-up in domestic demand over the coming year. Household spending and construction activity are supported by low interest rates, while the incentive for businesses to invest will grow in response to demand pressures.

Keeping the OCR at low levels is needed to ensure inflation increases to the mid-point of the target range, and employment remains around its maximum sustainable level. There remains scope for more fiscal and monetary stimulus, if necessary, to support the economy and maintain our inflation and employment objectives.

The Committee noted that employment remains close to its maximum sustainable level but consumer price inflation remains below the 2 percent target mid-point.

The Committee members discussed the initial impacts of reducing the OCR to 1.0 percent in August. They were pleased to see retail lending interest rates decline, along with a depreciation of the exchange rate.

The members anticipated a positive impulse to economic activity over the coming year from monetary and fiscal stimulus. The members noted that there remains scope for more fiscal and monetary stimulus if necessary, to support the economy and our inflation and employment objectives.

The Committee noted that, while GDP growth had slowed over the first half of 2019, impetus to domestic demand is expected to increase. Household spending and construction activity are supported by low interest rates, while business investment should lift in response to demand pressures.

The Committee discussed the long and variable lags between monetary policy decisions and outcomes.

The members noted several key uncertainties affecting the outlook for monetary policy, where there was a range of possible outcomes.

Fiscal policy is expected to lift domestic demand over the coming year. However, any increase in government spending could be delayed or it could have a smaller impact on domestic demand than assumed.

Some members noted that ongoing low inflation could cause inflation expectations to fall. Others noted that this risk was balanced by the potential for rising labour and import costs to pass through to inflation more substantially over the medium term.

The Committee discussed the secondary objectives from the remit and remained comfortable with the monetary policy stance.

The Committee agreed that developments since the August Statement had not significantly changed the outlook for monetary policy. They reached a consensus to keep the OCR at 1.0 percent and that, if necessary, there remains scope for more fiscal and monetary stimulus.