The RBNZ’s Covid deferred decision is just that, least regerts. 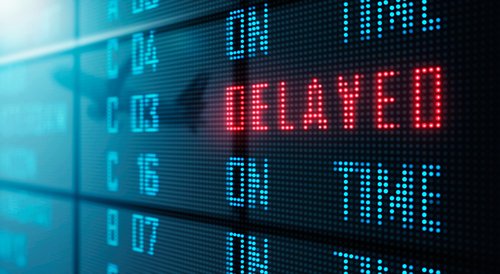 The RBNZ’s “least regrets” decision to defer, was just that. According to the Governor, today’s decision was a “time for pause while we observe” the impacts of the Covid outbreak. The document outlines a “clear direction” to lift the OCR. The RBNZ is signalling at least one rate rise by year end, all going well with the current Covid community outbreak. And the OCR is forecast to hit 2% by the end of 2023. That’s an aggressive track compared to market pricing, and our own forecast track which struggles to rise above 1.5%. 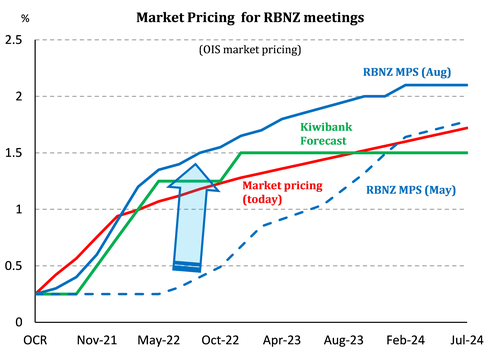 There was no doubt the RBNZ would have delivered a 25bp rate hike today, had the country not gone into a swift lockdown. The key line from the RBNZ’s statement said as much:

“The Committee agreed that their least regrets policy stance is to further reduce the level of monetary stimulus so as to anchor inflation expectations and continue to contribute to maximum sustainable employment. They agreed, however, to keep the OCR unchanged at this meeting given the heightened uncertainty with the country in a lockdown” (RBNZ Aug MPS)

In yet another unexpected twist in the covid story, NZ was put back into a level 4 lockdown due to the development of a highly infectious delta variant. Auckland and Coromandel will be in level 4 for at least a week. The rest of the country is locked down for three days. For the RBNZ, it’s back to a period of watch and wait and see how the current cluster develops. The RBNZ would have been the first among developed countries to have begun lifting interest rates from emergency settings.

Just prior to the RBNZ’s MPS we learnt that the single case recorded yesterday has jumped to 7. There will most likely be more cases in the coming days. The Government’s tough stance is a case of tough love. And if to support the decision, we also learnt today that the Australian state of NSW – where our latest cluster originated – has recorded 633 new cases over the last 24hr. It’s important to remember the plight faced by NSW.

The current delta cluster will hopefully prove a short-lived disruption. We think what’s more important to the direction of monetary policy over the next year is the current underlying picture for the economy. As we have seen in the past, once NZ gets through a covid outbreak the release of pent up demand is astonishing. And at present we have an economy that has the wind at its back. It’s clear we face major capacity constraints, labour shortages, and rapidly rising inflation pressure. To address the immediate disruption and hit to the economy, emergency fiscal policy is the best tool. The Government has already announced the availability of the wage subsidy for the worst hit firms. The wage subsidy should cushion the blow. Beyond the current cluster, the emergency monetary policy settings no longer seem warranted. The RBNZ said as much in today’s statement “… with a view to continue to reduce the level of monetary stimulus over time so as to best meet their policy remit.” 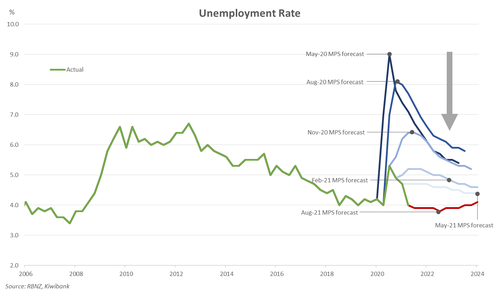 The economic climate is much hotter than the RBNZ envisioned in May. The Kiwi labour market has since returned to levels indicative of full employment, and inflation has breached the top-end of the RBNZ’s 1-3% target band. As expected, the RBNZ’s fresh set of forecasts were revised, significantly. The RBNZ see higher prices are on the horizon. Capacity pressures are being exacerbated by the ongoing supply shortages. But with strong demand, firms are more willing and able to pass on the higher costs. Inflation is forecast to hit 4.1%, before witling down to 2%. The RBNZ also expect the labour market to tighten further. With overseas labour off the cards, firms are scouting homegrown talent. The new forecasts see the unemployment continue its descent, reaching sub-4% levels. Looking at the new forecasts, it’s clear that the RBNZ has met its mandate. 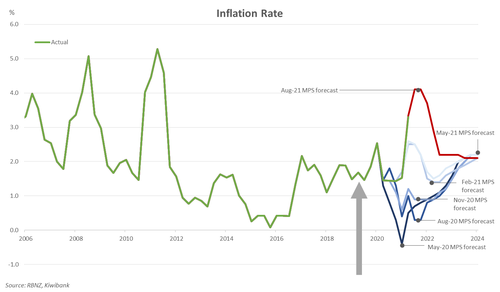 “Employment is currently at or above its maximum sustainable level, and consumer price inflation expectations remain anchored near 2 percent, the midpoint of the target range.” (RBNZ Aug MPS)

Of course, a large asterisk should be marked next to the forecasts. Because these were finalised before the lockdown announcement. If the restrictions are kept brief, then the lockdown will hardly derail the economy. Activity will bounce back once the restrictions are relaxed. But if the outbreak escalates and the lockdown is prolonged, the RBNZ might need to twink out the Q3 and Q4 forecasts. Similar to predictions for the Aussie economy, we may see another V-shape movement in economic activity. Although it’s still far too early to make such predictions.

Financial market traders reacted swiftly to news of an impending lockdown yesterday.  The Kiwi currency was slapped through 70c and hit 69c on the bad news. Wholesale interest rates were pegged lower across the curve, with the pivotal 2-year swap rate down over 25bps at one stage. Traders received swap rates with vigor, expecting more than just a delay. To say that the Covid outbreak has ‘taken the shine off’ Kiwi markets is an understatement.

The RBNZ’s delay, with hawkish OCR track, caused traders to reverse course, however. Wholesale rate traders digested the news and starting paying Kiwi rates in a reversal. The 2-year swap rate, for example, dropped from a pre-lockdown high of 1.42% to 1.16%, and is currently trading at 1.26%. The Kiwi dollar dropped from 70.4c to a low of 68.8, only to return to 69.37.