Workers are being attracted back into the workforce, and unemployment falls. 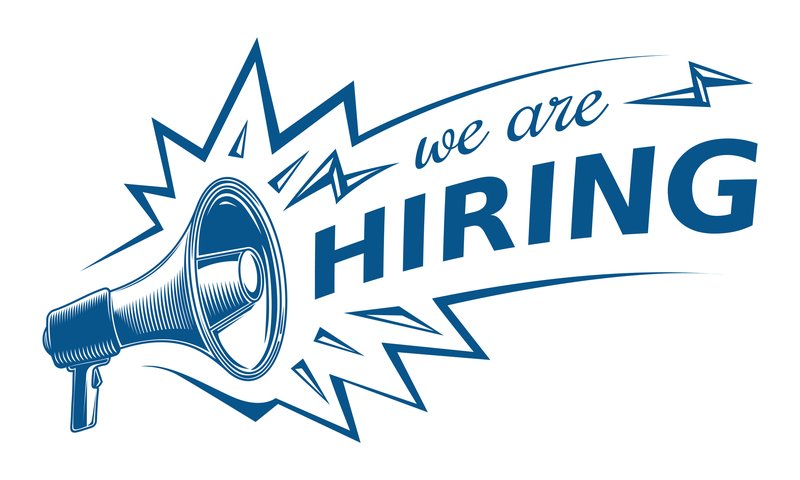 We’re back to full employment

In a remarkable 9 months, the Kiwi labour market has returned to levels inductive of full employment. The unemployment rate dropped in the June quarter to 4%, below even our rosy prediction of 4.3%. In addition, the underutilisation rate, which had signalled ongoing slack in the labour market in the March quarter plunged a full 1.6%pts to 10.5%. That’s an underutilisation rate back at pre-covid levels. There were some positive revisions to the historical data as well, a nice cherry on top.

Firms just can’t seem to get enough labour. They just can’t plug the gaps in the workforce while our border is closed. Employment grew 1%, just a touch ahead of our forecast. Total paid hours from the quarterly employment survey jumped a massive 3% in the quarter. The rise in employment in the June quarter looks to have drawn from the ranks of the previously unemployed. The 29k people employed coincided with a 16k drop in the number unemployed. As a result, the participation rate only edging higher to 70.5%. The consequence of such a turnaround in the demand for labour and emerging skill shortages is accelerating wage growth. The private sector Labour cost index (LCI) showed wage growth jumping to 2.2%yoy. Although it has to be said that a hike in the minimum wage to $20/hr also contributed to wage growth. 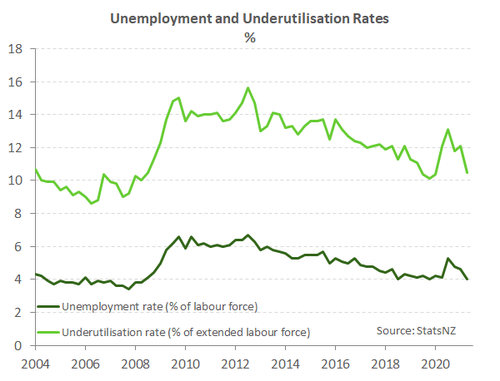 No matter which way today’s labour market report is cut, it was yet another strong one. The unemployment, underutilisation, employment, and wage growth were all on the stronger side of expectation. There is little now that could possibly persuade the RBNZ from hiking the cash rate in a fortnight’s time. We expect to the see the RBNZ hike 4 times over the next year to 1.25%, with another hike to 1.5% likely by the end of 2022.  All lending rates have risen and will continue to rise from here. If realised, the four-plus RBNZ rate hikes will see mortgage rates closer to 4%, with sub-3% rates evaporating quickly.

All eyes on the underutilised

The unemployment rate continued its descent. But we were expecting that. Our focus, this time, was on the underutilisation rate. The measure of slack in the market has fallen from its peak but had not yet recovered. The March quarter saw more people seeking more hours to work. Businesses were sceptical about the economic outlook and reluctant to hire. Fast forward three months, and we’ve taken a 180° turn. Employment indicators throughout the June quarter suggest strong labour demand coming through. Job ads were at record highs. Business confidence surveys report strengthening employment intentions among firms. And the number of work-ready benefit recipients have been declining. Today’s report confirms all that. The number of underutilised Kiwi fell a sharp 13.3% in the June quarter alone (48,000 fewer underutilised). And the rate has fallen from 12.1% to 10.5%, mirroring pre-pandemic levels. We expect spare capacity to continue to be run down in the coming months. Because our borders are still closed, and workers are desperately needed to respond to hot demand.

Wage growth accelerated in the June quarter. The private sector labour cost index (LCI), recorded a 0.9% lift coinciding with a hike in the adult minimum wage to $20/hr. But what is also apparent is a lift in underlying wage inflation too. Firms across the economy are facing challenges in finding the staff they need. A fact evident in recent business confidence surveys. After surveying Kiwibank Business Bankers and going on a roadshow in the Hawke’s bay the same message was coming through loud and clear. Firms are pushing existing workers to put in more effort, with overtime hours and rates rising in the June quarter. To attract the right workers, firms are having to pay up or work just can’t be done. “Labour supply is very short, with most of my portfolio reporting big capacity issues and they are now starting to turn down forward work.” Nick Hosking, Commercial Growth Manager, on Gisborne. 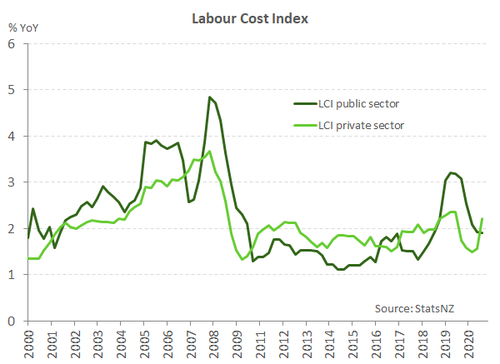 A key driver of staff shortages is the closed border, shutting out a ready source of workers. A source that can quickly plug gaps in the labour force during normal times. However, these aren’t normal times and the border is unlikely to reopen anytime soon. The highly infectious delta variant of covid is circulating around the globe, and at the same time NZ’s vaccination coverage is just far too low. For the labour market this means further strong wage growth lies ahead. Moreover, general inflation has taken off giving workers cause to ask for higher pay. Headline wage growth was well short of the 3.3% lift seen in the CPI over the same period. The RBNZ will be wary of the potential for rising general inflation and wage growth to start a little dance known as a wage-price spiral. The risk of self-reinforcing wage and general inflation is just another reason for the RBNZ to start hiking the cash rate at the August MPS in a fortnight’s time.

Scraping the barrel in desperation

Last week, we did a bit of a roadshow in the mighty Hawke’s Bay. We presented to over 150 locals, from growers to accountants. And not one company had all the workers they needed. Financial services and other professionals were trying to attract talent from the big cities. We heard employers were selling Hawke’s Bay “lifestyle on Auckland wages”, but the inflow of Jafas had failed to meet demand.

The most desperate calls came from the horticulture industry. Apparently, the WINZ workers being sent to pick apples, don’t like them apples. Workers are either unfit to work, or refuse to work a full week through fear of losing their entire benefit.  It seems the quality workers were thought might be displaced from tourism, have survived. And the horticulture industry is struggling to attract other Kiwi.

Naturally (and ignorantly) we asked why they haven’t invested in more machines to do the work. Well, apparently the ‘automated’ machines are simply not as capable as a low skilled human (yet). It’s only a matter of time. But for now, “tonnes of fruit” may be left to rot.  So it was no surprise the Government finally relented and allowed more RSE workers from ‘Covid-free’ Tonga, Samoa and Vanuatu.  Better (too) late than never.

Indeed, the mighty Hawke’s Bay scored a 9/10 in our regional heatmap. And that’s not good. It’s too hot. Goldilocks prefers 5-7, rather than burnt lips.

“With regards to rural, horticulture and forestry, labour shortages remain a concern. Crop sizes are significantly down due to labour shortages, meaning a lot of fruit has been left to rot. However, orchardists are benefiting from healthy prices for apples. Forestry owners too have benefited from strong export prices, with log prices increasing 20% in last 6 months. Farmers have also been buoyed by recent turnaround in sheep and beef prices.” Karl Trafford, Commercial Manager, Hawke’s Bay

Last week we released our latest regional economic heatmap. Over the last year, the Kiwi economy has gone from ice cold to fiery hot. Supply-side disruptions and labour shortages point to production delays and rising inflation.

Businesses now face acute capacity pressures and a shortage of workers. Leading the regions this year was Wellington, scoring an ‘imperfect’ 10. But it was a close race with 10 other regions bunched up just behind on a score of 9 – including the rest of the North Island, Canterbury, the West Coast and the top of the South Island. At the end of a very narrow spectrum, the Otago region scored the lowest at 7. There’s a clear divide between the North and South Island economies. Our farmers, orchardists and lumberjacks are benefitting from record-high commodity prices for all our homegrown goods. Down south, our tour guides are still doing it tough with the closed border and a popped trans-Tasman travel bubble. Nonetheless, the economic temperature is sweltering everywhere.

Last piece of the puzzle

The RBNZ’s dual mandate is rooted in the Phillips curve. The cash rate is adjusted to keep prices stable and employment at maximum sustainable level. The June quarter CPI report revealed inflation is now through the top of the RBNZ inflation target band at 3.3%. And inflation pressure looks broad-based. Almost all groups in the CPI basket recorded price rises. Demand in the economy has been consistently strong since coming out of last year’s level 4 lockdown. And combined with supply side constraints – such as firms facing challenges in sourcing labour and materials – we have a recipe for price rises. Core measures of inflation have also strengthened. There’s growing risk that current price pressures become (further) entrenched.

Today’s labour market report was the last piece of the puzzle. We had previously said that the RBNZ would be willing to wait for the labour market to fully recover before tightening policy. And at the risk of some inflation. The unemployment rate peaked at 5.2% back in September last year and has been on a clear downtrend. But an elevated underutilisation rate has kept the RBNZ from touching the cash rate. Today’s report however confirmed that slack in the market is being eaten away. The underutilisation rate fell to 10.5%, with fewer people seeking more hours to work. The belt around the labour market tightens. 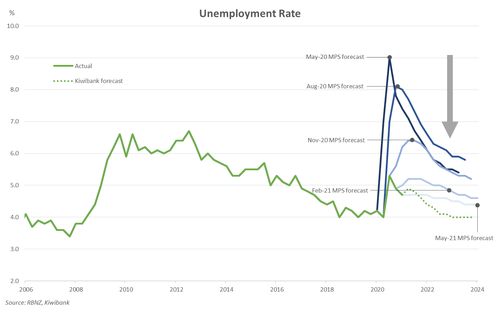 The RBNZ looks set to lift the cash rate in T-minus two weeks. The countdown begins. We expect to the see the RBNZ hike 4 times over the next year to 1.25%, with another hike to 1.5% likely by the end of 2022.  All lending rates have risen, and will continue to rise from here. If realised, the four-plus RBNZ rate hikes will see mortgage rates closer to 4%, with sub-3% rates evaporating quickly.