Icy climb: our forecasts are tweaked higher on a whiff of optimism. 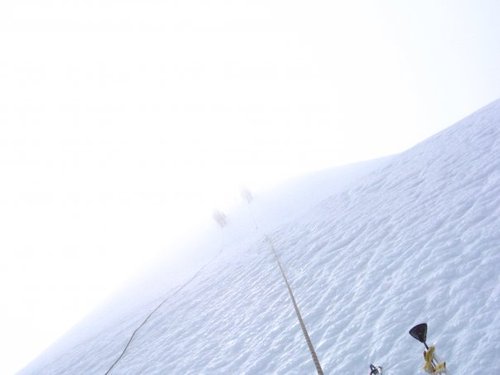 We look good, but the world doesn’t

Our economic forecasts have been revised a little higher. The changes reflect the early release from lockdown, and the strong bounce in activity out of lockdown. We’re cautiously optimistic, but suitably realistic. Damage has been done. Firms have failed, and more will fail. The level of unemployment has risen and will continue to rise. We’re not in a V (or Trumpian “i”) shaped recovery. We are unlikely to return to the 2019 peak in economic activity until mid-2022.

There’s still a very long and bumpy road ahead, with plenty of risks from offshore – including a return of the virus itself,  weaker trading partner growth, and the fact our borders will remain closed well into 2021. But yes, we’re in a better place than we thought we’d be.

The spread of Covid-19 is debilitating countries worldwide. There are now over 9 million confirmed cases. The US, Brazil, India, Russia and the UK currently top the highest number of cases. Countries have locked down to contain the virus. But lockdowns leave economies at a standstill. The IMF downgraded its 2020 global growth forecast from -3% to -5%. A 2%pt drop is massive on a global scale. The Global recession is the deepest since the Great Depression. The IMF’s downward revision reflects the severity of the damage caused by lockdowns. Social distancing will likely persist until the virus is either eliminated, or there’s herd immunity. The outlook is bleak.

While many countries have begun to lift restrictions, they’re still operating well below full capacity. And it’s a long road to recovery. PMIs across Europe have improved since the pandemic began, but the sub-50 readings show that economies remain in contraction. Despite over 75% of the globe reopening, the IMF project a slower recovery in 2021 at 5.4% (previously 5.85%). The threat of a potential resurgence in cases also looms large. New hotspots have emerged in Florida (US), Victoria (AUS), and several Southeast Asian countries. Re-introducing lockdowns would only derail the pace of recovery. And re-introducing lockdowns will have a far greater impact on economies already weakened.

We take some comfort in the exceptional policy response to date. Authorities around the world have committed to do ‘whatever it takes’ to cushion the blow. Over $10 trillion has been expended in global fiscal support, through business loan provisions, wage support and cash grants. And monetary policy stands to win best supporting actor. Interest rates have been slashed, liquidity injected, and billions of assets purchased. As hoped, financial markets have stabilised. As economies limp their way back to ‘normal’, now’s not the time to pump the policy brakes. Joint fiscal and monetary support must continue.

While we keep our gaze fixed on the pandemic, our peripheral vision sees rising geopolitical tensions – another threat to the global economy. The trade spat between the US and China is intensifying (thanks Pete Navarro); China and Hong Kong are still dealing with issues on security; and the UK and EU continue to work through the details of their divorce. Trade disputes in an age of deglobalisation threaten an already embattled global economy. 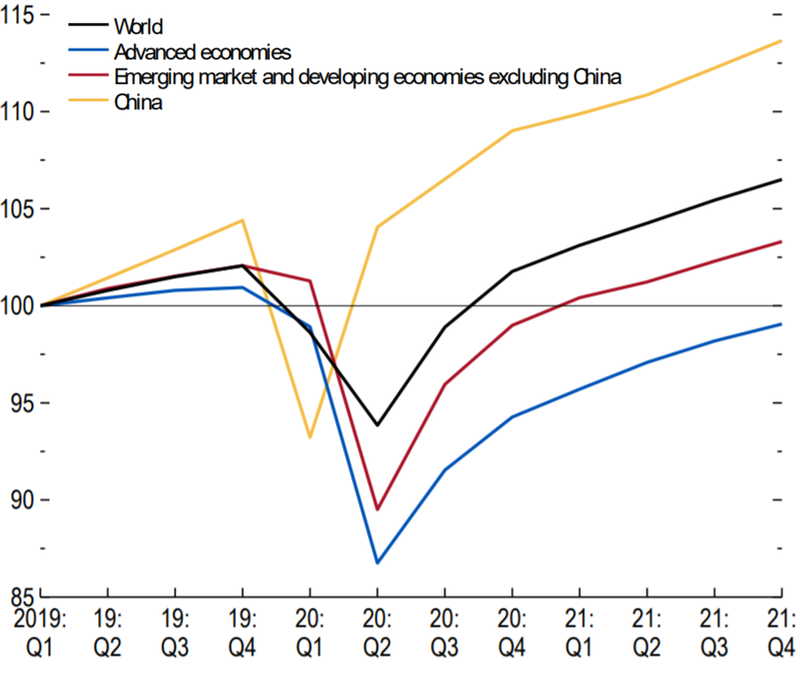 The only cases currently recorded in NZ, are Kiwis coming home. The rampant spread of the virus offshore means we will remain reluctant to open our borders to tourists. So while we celebrate our return to 95% capacity, we must also consider the starvation of the 5%. The ongoing crisis around the world only delays the potential reopening of NZ borders, shutting out international tourism.

Locally, things are on the up

Compared to our last set of numbers, after the May budget, we’re a little more cautiously optimistic. Domestically, the first quarter GDP report was weaker than we had expected. But the second quarter GDP report should be better than we had expected. We’ve simply made it out of lockdown 4-6 weeks earlier than anticipated. While in level 4 we lost around 35% of our output, and in level 3 we lost around 20%. We weren’t at level 2 for long, losing 10% of output. And now that we’re in level 1, we’re back to 95% capacity. Our internal (transactional) data has given us reason to be more upbeat on the rebound into the third quarter (see our data insights). 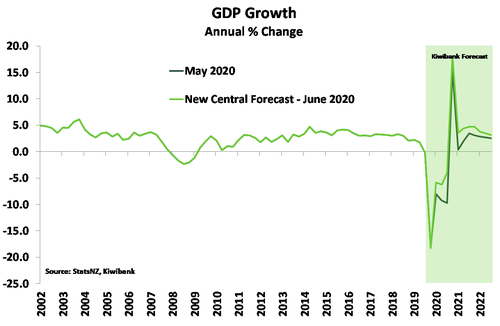 At this stage it’s impossible to gauge whether the strength in activity is simply a “sugar rush” of pent up demand out of lockdown, or a swift return to something closer to normal. We suspect it’s a bit of both. That’s our way of saying: it looks like a return to more normal settings, but damage has been done. Although we’ve lowered our unemployment forecast from 10.2% to 9.8%, that’s still a rate more than double where we started, and the highest level since 1993. Our forecast spike in unemployment is short-lived, compared to past recessions. Outsized fiscal and monetary policy responses help. Nevertheless, such a rise in the unemployment rate is likely to cause a modest correction in house prices, of ~9%. And consumption will be impacted into 2021. But the downside risks to these numbers has receded, for now at least.

Of course, our forecast recovery is dependent on no more outbreaks of Covid-19. Community transmission may force authorities to once again lockdown the country. And the economic impact of a second lockdown would be far worse than the first.  We have also made the bold and optimistic assumption that our borders will be reopened around June next year. An assumption far from guaranteed. 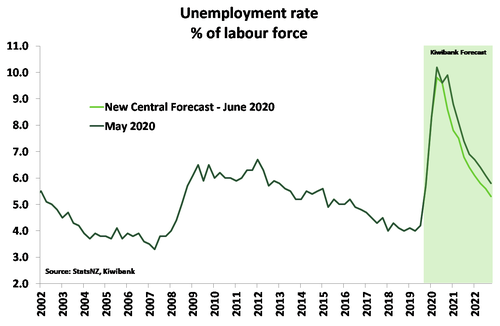 Our mildly optimistic shift in forecasts includes a lift in system-wide credit growth. Mortgage lending should avoid a rare contraction, and post mildly positive growth of 0.4% into  2021 (down from over 6%yoy last year). The various policy initiatives, including mortgage deferrals and the removal of LVR restrictions, helped. Business lending, however, is much more cyclical. Following solid 5-to-7%yoy growth since 2015, business credit is likely to contract by nearly 10% into 2021. The forecast contraction is likely to be shorter, but slightly sharper, than the contraction recorded during the 2008 GFC. The shock to most (non-tourism) companies was harder, but shorter lived. And there’s a reluctance of firms to take on debt during highly uncertain times. Not to mention a reduction in risk appetite across the board.

A recovery full of opportunities

The unprecedented nature of the economic shock means we face a unique recovery, full of opportunities (see our recent industry note). For instance, trends that were slowly developing have been accelerated in a time of Covid. These trends play a key role in how Kiwis consume, work, and travel. The nationwide lockdown forced many people online. Consumers that may not have shopped online before, are now apt and loving it. Old habits are broken as new ones are formed. We have seen a faster (structural) shift in behaviour toward more online retailing. What was already well-known and well-studied, is now well-in-advance. 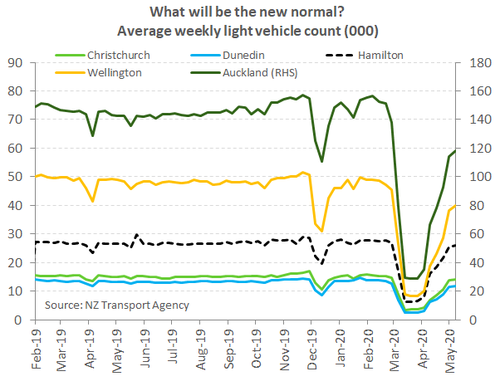 A key opportunity dished up by Covid-19 is a weapon in the fight against climate change. Many Kiwis were forced to work from home, and some even preferred it. Alert levels 3 and 4 provided proof of concept that a decent chunk of NZ’s workforce could work successfully from home. Thereby reducing the need for the daily commute. A shallower peak in transport takes some pressure off clogged transport infrastructure and reduces carbon pollution.

A shift to working from home will change the nature of many places of work. If a large share of the workforce continues to work from home, office space in our largest centres will be freed up, helping to boost productivity. Businesses may find more resources to invest in the next opportunity. On the flipside however, the commercial property sector will likely face the challenge of reduced demand.

Many industries may grab onto opportunities made available by disruptions to global supply chains. The inevitable reallocation of resources towards more productive firms and processes will have benefits. The faster adoption of productivity enhancing technologies such as AI and automation seem obvious.

The forecast recovery is also supported by significant policy support. The Government has earmarked $62bn in response and recovery funding. But the much-needed stimulus has hammered the Crown’s books. See our Budget 2020 overview for details. The huge fiscal impulse, propping up growth, brings large deficits and ballooning debt. Net debt is forecast to build rapidly over the four-year forecast horizon, jumping to 30% of GDP by the end of June, and then hitting a peak of 53.6% in 2023. It’s a material blow out for New Zealand. But it’s not relative. Most countries around the world would love to start at 53%, and many will end up above 100%. 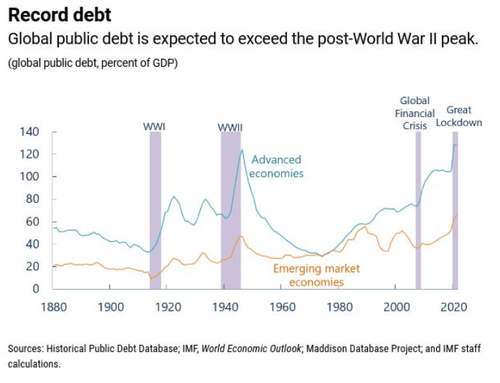 Increased indebtedness is the natural consequence of fighting a crisis of magnitude. However, the weaker fiscal position may pose some tough decisions for future Governments. Future Governments will be charged with lowering net debt levels. The desire to return to the meaningless debt target of 20% of GDP will fade. We’d expect a more reasonable return to a 30-40% target to GDP. Either way, trade-offs will have to be made to better balance the books. The trade-offs will have to focus on the tax system, and the Government’s largest single expense item – NZ superannuation. The tax system may need to be broadened, thresholds adjusted, and a capital gains tax may be brought back to the table. For NZ superannuation, increases to the age of entitlement will need to be made, it’s inevitable. The retirement age is much more likely to be 70, than the current 65, by the time the authors of this research get there. Means testing recipients will also have to be debated at some point.

Speaking of debt, we’ve seen the long-end of the Govie bond curve steepen up a little. Because the NZDMO has a large issuance task and will issue a new 2041 bond mid-July. It’s just a timing thing, in our view. Domestic and international investors are weighing up the increasing duration (supply in size and term length) of bonds to market, and the likely takedown of NZGBs by the RBNZ (in its LSAP program). We expect the RBNZ to re-flatten the curve like a Sumo wrestler grappling a bull. To win this battle, at least, the RBNZ will most likely announce an increase in the size, length and scope of LSAPs at the August MPS decision.

LSAPs should double from the current $60bn cap to $120bn, as needed. Expectations have been set for the August MPS on expanding the program. And we expect to get a better feel for the RBNZ’s enthusiasm to use additional tools. Negative interest rates are still up for debate. And we are far from convinced negative rates are the right tool. If the RBNZ wants to drive retail lending and deposit rates lower, a term lending facility to the banks would have immediate effect. 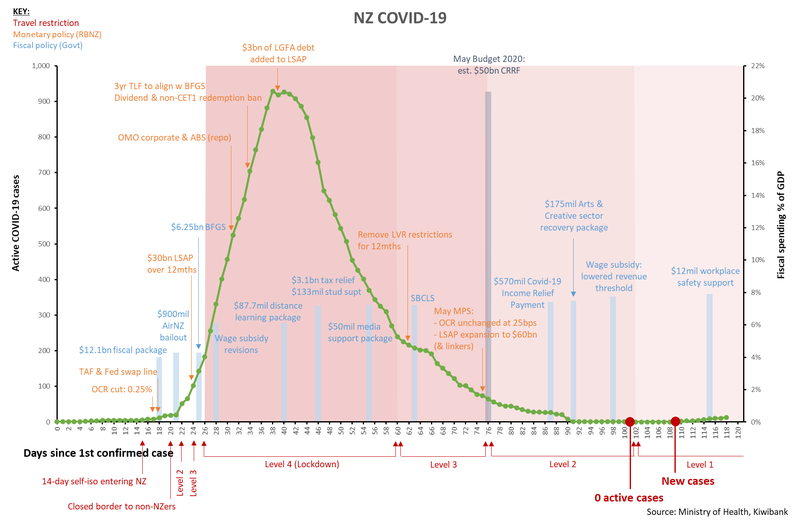 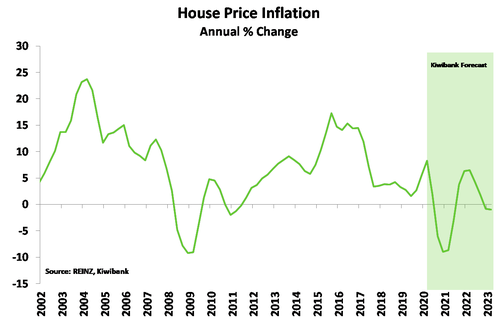 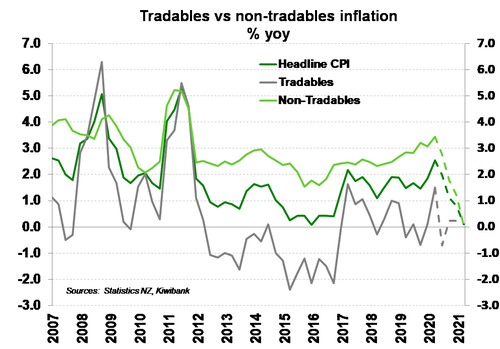