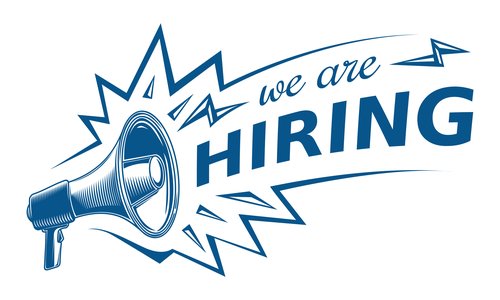 The labour market remains a source of strength for households but is also another source of domestic inflation pressure. As predicted the unemployment rate stood still at a record low 3.2% in the March quarter. And wage growth hit a 13-year high at the start of 2022. The March quarter result was solid given surging omicron cases disrupted the jobs market. StatsNZ found that 1.6%, or over 40,000 of those employed were absent from work due illness in the March quarter (67% up on the start of 2021). Covid also likely meant some employment decisions were put on hold, with employment growth slowing to below 3% at the start of 2022, from 3½ at the end of last year. Omicron failed to disrupt the current run of play. All major labour market indicators continued to scream red hot in the quarter. Moreover, the surge in daily Omicron cases has been short-lived, having peaked early in the June quarter. Firms’ future employment intentions have held up remarkably well in recent months all things considered.

However, in economics nothing is ever all good or all bad. A red-hot labour market might be great for those typically on the fringes of the market. But current major labour shortages throw up other problems – in this case primarily adding to decades high inflation. Local inflation is running at 6.9%, with housing related costs skyrocketing over the last year. The private sector labour cost index (LCI) grew 0.7% in the quarter to see annual wage inflation lift above 3% for the first time in 13 years. And rising wage growth has much more to go given persistent labour shortages and the rising cost of living fueling a rise in wage expectations. According to StatsNZ, a larger share of workers feels secure in employment, which will likely embolden workers position for higher pay this year.

There was nothing in today’s labour market report that would make us reconsider our outlook for the RBNZ. The RB needs to continue to apply the brakes on the economy. We still expect the RBNZ to deliver a 50bp rate hike at the May MPS later this month (May 25) to take the cash rate to 2%. We see the RBNZ then keep lifting the cash rate to 3% by November.

Financial markets have reacted, again, with higher interest rates in wholesale markets. A lack of liquidity and one-sided trading have seen some chucky moves higher in yields. The market now has a series of 50bp hikes priced. What does it all mean? Mortgage rates will continue to rise from here.

An extremely tight labour market is driving wage growth higher. The private sector LCI lifted above 3% for the first time in 13 years. However, wage growth still lags CPI inflation (6.9%) by a long way. The LCI is a measure of pure wage growth, comparing the wages and salaries of specific jobs from quarter-to-quarter. But households are not just waiting for wages to catch up to the cost of living and are responding to rising living costs already. That is, total labour incomes are growing much faster than underlying wage growth. Kiwi workers are working longer weeks, and a labour shortage has increased opportunity for promotion to higher paying positions. Average weekly earnings measured in the Quarterly Employment Survey (QES) was up 5.7%. The unadjusted LCI, which doesn't adjust for employment quality (e.g. job promotions) jumped to 4.8% compared to March last year. Average weekly paid hours shot out of 2020’s lockdown and remain near record highs. And engagement with the labour market is high too, with the participation rate easing a touch to 70.9%. Nevertheless, the eyewatering surge in inflation this year is clearly eroding real incomes. It will take time for wage growth to catch up. 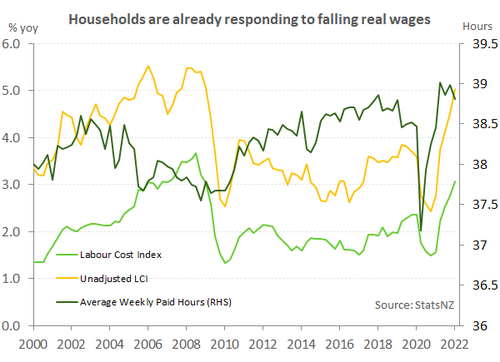 Wage growth will continue to rise in the quarters ahead. The labour market is a lagging indicator of the economy, and we are forecasting wage growth will hit 4% by year end. Real wage growth is expected to return next year. Reopening the border will in time help to alleviate labour shortages. Unfortunately, labour shortages are expected to get worse in 2022 before they get better. We are forecasting a net 20,000 long-term departures by the end of the year due to the phased opening of the border. Kiwi cooped up here in Aotearoa during covid are again spreading their wings and exploring the world. Meanwhile, long-term arrivals from non-visa waiver countries aren’t allowed to enter New Zealand until October. The biggest sources of non-NZ arrivals prior to covid came from non-visa waiver countries such as China, India and South Africa. 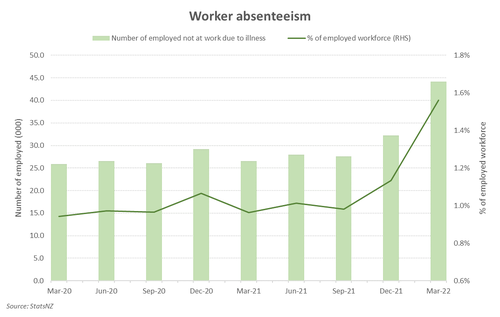 Omicron spread like wildfire across the country during the March quarter. With the record number of daily cases seemingly broken each day, a spike in worker absenteeism was to be expected. Today’s report confirms just that. Of the 2.8 million people employed over the quarter, 1.6% (44,200) were away from work due to injury or illness, which includes Covid. That’s up 67% compared to the March quarter last year. Despite the greater transmissibility of the Omicron strain, the concentration of these absentees amongst retail trade (18%), health care (14.5%) and construction (14.3%) comes as no surprise. Because of the close-contact nature of these industries. Covid was also the culprit as to why more were working fewer hours than usual. Compared with last year’s March quarter, over 20% more people recorded as having worked fewer or no hours. The rise in worker absenteeism however is expected to be a one-time shock, similar to overseas experience. We’re now past the peak of the Omicron outbreak.

As mentioned above, annual net migration outflows could reach around 20,000, by the end of the year. With fewer people booking one-way tickets to NZ, the outflow will only add further stress on the labour market. However, a skills shortage and 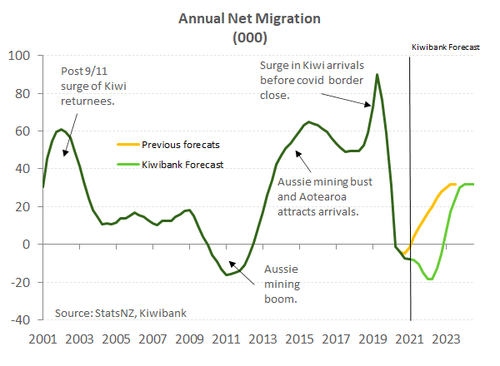 mismatch will mean an unemployment rate in the 2% range will be difficult to sustain, let alone achieve. Given the pre-covid migration trends, current job vacancies may not be filled until next year. We expect the labour market to remain historically tight for some time yet. Wage growth is expected to rise even further as employers do all they can to attract, and perhaps more importantly, retain staff. It’s not just NZ that’s facing a tight labour market. The US, UK, Canada and Australia, to name a few, are also experiencing the so-called ‘Great Resignation’ phenomenon. But these countries are offering relatively higher wages and relatively more affordable housing. We’ve got some tough competition.

Financial market traders are floating in a fantasy land

The Kiwi wholesale interest rate market continues to push higher, and higher, and higher. Global interest rates are lifting as central banks, including the Fed, BoE, BoC and now the RBA, tighten into rapidly rising inflation. Locally, the RBNZ’s 50bp move in April has essentially locked in another 50bp move in May (25th). And Kiwi rates traders are pricing in another 50bp hike for June (to 2.5%). The terminal rate priced into the market is over 4%.  Swap rates are gapping higher with very little liquidity. And swap rates are well beyond where most fundamental analysis suggests policy will end up. To quote our Treasurer, “these levels are getting further and further into fantasy land”.

The 2-year swap rate jumped 10bps today to hit 4%, and the curve continues to flatten. A lack of liquidity and one-sided trading have seen some chucky moves higher in yields. The market now has a series of 50bp hikes priced. What does it all mean? Mortgage rates will continue to rise from here.